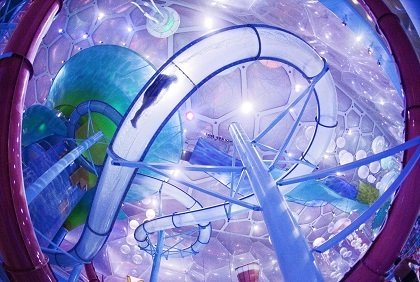 CNN — Some of us are lucky enough to live within a rogue inflatable ball's reach of the world's best beaches.

Some of us can paddle out for a ride on the greatest waves on a whim.

For those of us who live further inland, or prefer something less salty, there are still watery joys to be had, in the form of the world's best water parks.

One enormous wave pool obviously wasn't enough for the team behind Aquatica, so they built two, side by side.

Elsewhere, the Dolphin Plunge water slide takes passengers on a white-knuckle ride through a dolphin-filled aquarium and riders brave enough to take on the Omaka Rocka blast down a series of flumes and funnels.

There's a sandy beach covered with 1,360 tons of soft, white sand and South Seas-inspired gardens with more than 60,000 species of plants. 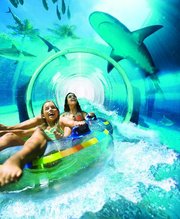 Aquaventure was expanded in 2013 to include a Leap of Faith ride that passes through a shark-filled aquarium. Visitors can swim in a manmade lagoon filled with marine animals.

The park's other attractions include several water coasters, a 2,296-foot-long (700 meters) private beach and the Shark Lagoon, where visitors can hand-feed rays.

An Alpine lake is the location for this outdoor water park, which opens from April to the end of September.

There are water rides, a diving tower and a hydro-speed slide.

Exhausted visitors can power nap in one of the water park's sleeping rooms, which have purified air and beds carved from energy-boosting jade.

Siam Park, a Thai-themed water park, offers surf lessons in the wave pool, which is capable of creating waves up to nine feet (three meters) high.

Siam Park is a Thai-themed water park on the island of Tenerife.

The park's most popular ride is the 91-foot-high (27 meters) Tower of Power, on which riders plunge down a vertical drop before shooting through an aquarium filled with stingrays and sharks.