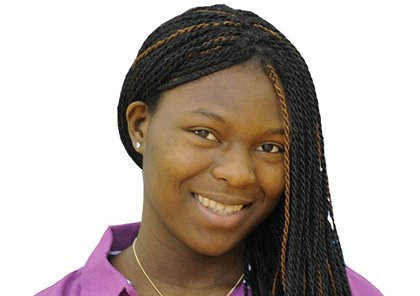 BOWIE, Md. — A Bowie State University (BSU) undergraduate with dreams of becoming an immigration lawyer will travel to her childhood home of Nigeria in the fall to study the Yoruba language, as a recipient of the highly competitive Boren Scholarship.

Iyabode Sodipo, 20, a junior criminal justice major from Baltimore, was selected among hundreds of applicants around the nation as one of 160 students to receive the scholarship. Funded by the National Security Education Program, the award promotes international study in areas critical to U.S. interests. After completing the program, she must work for one year in a national security role with the federal government within three years of graduation.

This summer, Sodipo is enrolled in eight weeks of Yoruba classes at the University of Florida to prepare for international study. In Nigeria, she will immerse herself in the culture by living with a host family and studying the language at the University of Ibadan in the western part of the country. Yoruba is spoken by more than 28 million people worldwide.

An international relations class at Bowie State University exposed her to differences between the U.S. government and laws around the world, but Sodipo has always wanted to work in immigration law and study the traditions of her home country.

“Growing up in a household where my parents and my brother spoke the language made me interested in learning about the language and the culture,” she said. “I know what it feels like to enter a new world and be unfamiliar with the culture or practice. That's why one of my desires is to help those are unable to help themselves due to language barriers. I also believe that the law has the ability to transform societies and strengthen relationships among nations, thus creating a safer world.”

Sodipo grew up in Nigeria and attended school there until she was seven, when her family moved to the United States. While in Nigeria, she could only speak French or the official language of English in class. Her formal education rarely included information about native Nigerian cultures, making her participation in the Boren program deeply meaningful.

“Honestly, with my family, I think it will strengthen our relationship. Since the majority of my family still lives in Nigeria, I will be able to connect with them more on a personal level,” she said.