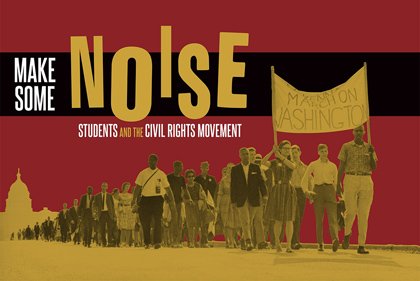 WASHINGTON — On Friday, August 2, 2013, in time for the 50th anniversary of the March on Washington, the Newseum will open “Make Some Noise: Students and the Civil Rights Movement,” an exhibit that explores the new generation of student leaders in the early 1960s who fought segregation by exercising their First Amendment rights and making their voices heard.

A series of panel discussions and special events relating to civil rights and the roles the First Amendment and the news media played in that movement will be held throughout the year. Additionally, the Newseum will make civil rights educational resources available for teachers around the world through the Newseum’s Digital Classroom.

On August 22, 2013, at 7 p.m., the Newseum, in partnership with the National Council of Negro Women (NCNW), will host a free evening program, “Covering Civil Rights: On the Front Lines.” The program will include a special appearance by Elder Bernice King, chief executive officer of The King Center and daughter of civil rights leader Martin Luther King Jr. and Coretta Scott King. Rev. King will receive the NCNW’s 2013 Leadership Award.

Moderated by Sirius XM radio host, Joe Madison, the event will also feature a discussion with journalist and author of “Shocking the Conscience: A Reporter’s Account of the Civil Rights Movement,” Simeon Booker, who was on the front lines of covering the civil rights story. The program is free and open to the public, but seats are limited and must be reserved at CoveringCivilRights.eventbrite.com.

The Newseum’s exhibit, “Make Some Noise,” will spotlight key figures in the student civil rights movement, including John Lewis, now a U.S. representative from Georgia, and Julian Bond, who later became chairman of the NAACP. Through the Student Nonviolent Coordinating Committee, young activists took direct action to end segregation and break down racial barriers in voting rights, education and the workplace by organizing sit-ins, marches and voter registration drives.

The exhibit also will feature a section of the original F.W. Woolworth lunch counter in Greensboro, N.C., where in 1960 four African-American college students launched the sit-in movement, and a bronze casting of the Birmingham, Ala., jail cell door behind which the Rev. Martin Luther King Jr. penned his famous “Letter From Birmingham Jail” in 1963.

In addition to “Make Some Noise,” the Newseum will launch a three-year changing exhibit, “Civil Rights at 50,” which will be updated each year to chronicle milestones in the civil rights movement from 1963, 1964 and 1965 through historic front pages, magazines and news images.

Many elements of the civil rights exhibit will be incorporated into the Newseum’s Digital Classroom, the museum’s online education center. Launching Aug. 30, 2013, this free resource will explore the civil rights movement through the lenses of historical connections, media literacy and civics and citizenship using videos, archival news footage and interviews. These standards-aligned lesson plans will help teachers enhance student engagement with Newseum content, their communities and their peers across the country.

For more information about all the Newseum’s civil rights initiatives, visit: www.newseum.org/civilrights