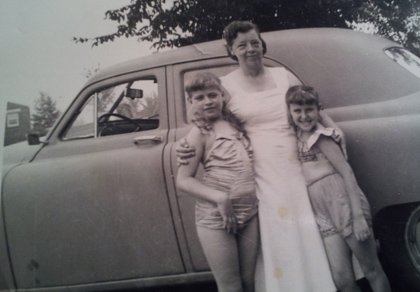 I was thinking the other day as the temperature outside soared close to ninety degrees, that summertime has finally arrived. It seems like it was just yesterday when the first daffodils of spring were blooming.

My Mama always said that the older you get the faster time goes and now I know exactly what she meant. However, in my childhood years, summer stretched out like it would never end.

In our small home my younger sisters, Beth and Bobbie and I shared one bedroom crowded with three twin beds and Mama and Daddy had the other one. One bathroom, a living room and kitchen completed the house except for a small utility room.

There was a coal furnace, an ash bucket and shovel, and my Mama's pride and joy, a second hand wringer washer. It was on wheels so you could move it to the kitchen sink to hook up the hoses. Clothes were hung outside on clotheslines and I can still remember the smell of sunshine and fresh air as we folded our laundry.

Our home was located in a low cost area of Baltimore City. By today’s standards we would be considered poor but we didn't know it back then. Our little house did not have air conditioning, but the windows had screens and a fan set on exhaust would bring a breeze into the kitchen.

My father was an upholsterer by trade so our furniture always had new coverings and Mama always kept our house spic and span. In the summer we would change the oilcloth blinds to darker ones so when they were pulled down it kept out the heat of the afternoon sun. We had a small blow up pool in the backyard (just big enough to sit toe to toe and shoulder to shoulder with about one foot of water) a swing set and hopscotch painted on the sidewalk.

My best friend, Linda Jean who was eight-years-old to my seven was a little mysterious. She lived with her grandmother next door and her real mother only came to visit every few weeks. She never spoke of her father or if she had siblings.

She was everything I wanted to be. She had golden blond hair that was curly and very long and sky-blue mischievous eyes. She was fearless and attempted things I had never even thought about. Linda Jean had a way of making everything fun and exciting. I adored her.

It was her idea to use her grandmother's fresh baked bread to feed the birds. She made up a game of us walking backwards which was fun until we fell into a rose bush and had to have my Mama pull out thorns from our clothes.

That seemingly endless summer was filled with front porch picnics, looking for four leaf clovers and laying in the grass to see what we could find etched in the clouds. We would sit on the swings and giggle over anything. We caught and released butterflies, played house with our Tiny Tears dolls and at dusk we would wish on the first star.