Can men and women be 'just friends?' 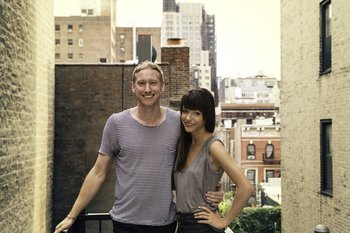 Longtime friends Timothy Goodman, 32, and Jessica Walsh, 26, are dating for 40 days as an experiment. Their blog, 40 Days of Dating, has gone viral. Santiago Carrasquilla

CNN — Truly platonic opposite-sex friendships are the chupacabra of the pop culture narrative. From "When Harry Met Sally" to Ross and Rachel, first comes friendship, then comes relationship.

Longtime friends Timothy Goodman, 32, and Jessica Walsh, 26, have taken to exploring the leitmotif once more -- and in a 21st century twist, decided to share it with the world via their blog, 40 Days of Dating.

The two friends met more than four years ago through New York City's graphic design community. When they both found themselves single at the same time, they decided to embark on the social-turned-design experiment.

"Tim is afraid of commitment, often dating many girls at once, and he's losing sight of what a healthy relationship means," the couple explains on the blog. "Jessica is a hopeless romantic, jumping into relationships too quickly, always looking to find 'the one.' "

First, they set the ground rules for the experiment, which started in mid-March:

They began adding new posts about the relationship only after the 40 days were up. They've been posting entries Monday through Friday since July 10, and they'll continue until August 22, when readers will learn how their experiment ended.

"We didn't want to do this live because if we read each other's questions, we'd be influenced by each other and by the public's perception of it," Goodman said.

Their readership has grown so much that both Walsh and Goodman have had to retroactively monitor their social media accounts to prevent spoilers. The couple wouldn't offer any hints about the outcome -- they suggest people stay up-to-date with their romantic escapades via the website.

Goodman and Walsh spoke to CNN separately about the online dating project and the age-old question, can men and women really just be friends? The interview has been edited for clarity and brevity.

CNN: Why'd you choose to do the project with each other?

Walsh: I had basically, since the time I was 16, jumped from relationship to relationship up until a year and half ago when I ended a relationship with a guy I had lived with. Since then, I had been looking -- and New York City is such a tough place to find a guy. It was just a terrible year of dating. It was just the right time when we started talking about it.

CNN: You've been friends for more than four years. Was there always an attraction?

Goodman: It's always been platonic, but we wouldn't have been able to do this project if there hadn't been some curiosity. I've always been attracted to Jessie; I know she's beautiful. We're very different though; I'm more outgoing, she's more reserved.