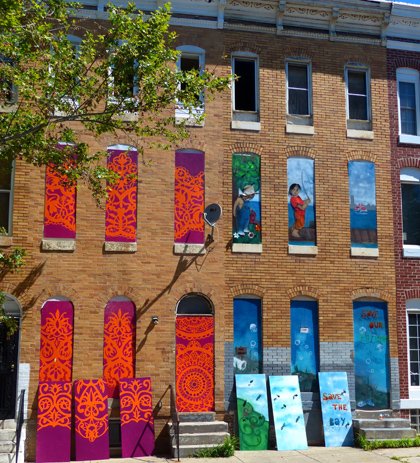 The “Spruce-Up” grant program, which is managed by the Central Baltimore Partnership (CBP) engages local residents, businesses, artists and other stakeholders in order to improve the quality of life for residents of the Station North district. CBP is a coalition of neighborhood, private, public and institutional interests implementing a comprehensive community development strategy in the Central Baltimore area. The Greenmount West Facade Improvement Project. Courtesy photo

BALTIMORE — The vacant space at the corner of Charles Street and North Avenue, which was formerly home to New York Fried Chicken, has been renovated into an office, gallery and performing arts space to serve The Station North Arts and Entertainment District office.

A few blocks away, an old police booth at the corner of North Charles and East Lanvale Street houses a rotating visual arts display. Known as The Chicken Box and The Koban Project, these two exciting additions to Baltimore’s artistic landscape are among the projects that have come to fruition thanks to the Spruce-Up grant program.

Managed by the Central Baltimore Partnership (CBP), the Spruce-Up grant program engages local residents, businesses, artists and other stakeholders in order to improve the quality of life for area residents of the Station North district. CBP is a coalition of neighborhood, private, public and institutional interests that are implementing a comprehensive community development strategy in the Central Baltimore area— an area that is roughly bordered by the Johns Hopkins University Homewood Campus to the north; Greenmount Avenue to the east; Mt. Royal Avenue to the south; and Fallsway to the west.

In July, CPB announced the completion of The Chicken Box, The Koban Project and five other high-impact neighborhood improvement projects in the Station North Arts and Entertainment District. All seven projects were completed within six months.

“Our general goal was to engage with Station North Arts artists, residents and other area stakeholders to implement community projects and to do it in an engaging way,” said Ashley Wallace, Community Planner for the Central Baltimore Partnership. “The projects have had a big impact in the community. The quality of life for patrons and commuters is of high importance to the community.”

Wallace went on to say, “The implementation of these projects in six months speaks to the fact to they were ready to go and in the pipeline. It also showed collective action in these areas was taken. Two of the major goals of the Spruce-Up grants were to engage the population of the area, and to address the larger vision of the community.”

According to Wallace, the total cost for the projects was $200,000, with the Robert W. Deutsch Foundation funding $100,000 of the amount. She noted that the foundation wanted to see how the first round of funding went, and that plans are in the works for the additional projects in Station North Arts and other Baltimore areas.

“We are building off the success of the Spruce-Up program,” she said. “Increased perception and marketing of the community of Baltimore creates a lot of synergy.”

Sergio Martinez, chair of the New Greenmount West Community Clean and Green Committee, initiated and managed the Greenmount West Community Facade Improvement Project for the Spruce-Up grant. “The grant has helped our community tremendously,” Martinez said. “The funding for the grant allowed us to engage local artists, a local organization and local residents to help positively and dramatically change our neighborhood through Art.”