I do ... cost a lot: Weddings by the numbers

The average wedding cost is $28,427, according to a survey by TheKnot.com 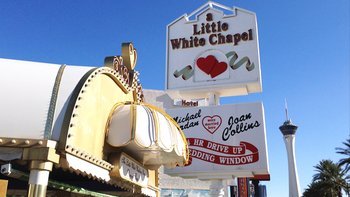 A Little White Chapel is just one of many wedding chapels on the Las Vegas strip. Kat Kinsman/CNN

CNN — All you need is love, right? Sure, but a little cash can't hurt, especially when it's time to get hitched.

Weddings are big business across the United States. Here are some quick stats on how money meets matrimony, and the most popular places and ages at which to pledge your eternal devotion.

$53.4 billion: Value of the wedding industry in the United States, according to market research by the Wedding Report.

$76,687: The average cost in 2012 of a wedding in Manhattan, the most expensive city, according to the "Real Weddings Survey."

11: Percent of couples who travel more than 200 miles to get married.

63: Percent of gay couples in the United States getting married who plan to go on a honeymoon, versus 84% of straight couples, according to a same-sex marriage survey by The Knot.com and The Advocate magazine.

17: Percent of couples who get married in June in the United States, the most popular month.

17: Percent of American brides in 2012 who opted for a "casual" wedding, more than in past years.

35: Percent of American weddings taking place in a house of worship, such as a church or synagogue.

$19 billion: Gifts purchased in 2010 from wedding registries, according to a marketing study from the University of Notre Dame.

24: Percent of U.S. weddings that are destination weddings, according to BigCityBride.com.

7: Number of days a week marriages are performed at the Clark County Office of Civil Marriages, where Las Vegas is located.

$275: Cost of the "Hound Dog" wedding package at "A Elvis Chapel" in Las Vegas. Elvis sings three songs and will walk the bride down the aisle.