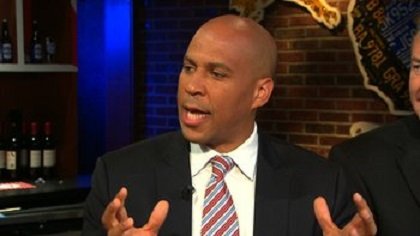 He'll battle the GOP winner, former Bogota mayor Steve Lonegan, for the October 16 contest, though polls show Booker is already considered the favorite to win the seat and become the first African American elected to the Senate since Barack Obama.

(Republican Sen. Tim Scott of South Carolina is currently the only African American in the Senate, but he was appointed--not elected--to his seat.)

"Thank you. It is such an honor to be your nominee, to be your Democratic nominee for the United States Senate," he told supporters at his victory party late Tuesday night in Newark.

Speaking with a slightly hoarse voice, Booker pledged to be "unwavering" in finding common ground in Washington if he becomes the state's next senator.

"The direction I will be most concerned with will not be right or left, it will be with going forward."

While Lonegan now moves on as the GOP's pick for the seat, he trails Booker 29%-54% in a hypothetical matchup among registered voters, according to a Quinnipiac University poll released last week.

With more than 1.4 million followers on Twitter and Oprah Winfrey as one of his biggest supporters, Booker's appeal and frequent television appearances have reached beyond the borders of the Garden State.

Actress Eva Longoria appeared at an event for Booker on the eve of primary day, encouraging voters to turn out for the two-term mayor.

Elected in 2006, after losing his first mayoral attempt in 2002, the Stanford grad and former football player previously served on Newark city council. Booker's resume also includes a law degree from Yale and a Rhodes Scholarship to Oxford.

His critics have accused the mayor of being more interested in his celebrity status than waging a serious campaign. But Booker's high profile has helped in part with his massive fundraising haul. As of July 24, the candidate has raised $8.6 million and has $4 million in the bank, according to Federal Election Commission reports.

Rivals also bring up Booker's involvement in his internet start-up, Waywire. As the chairman with the largest share, Booker began promoting the struggling company last year. Critics argue the business was a distraction to his job as mayor, and they faulted him for initially opening up offices in New York City, rather than in his own town of Newark. Those offices closed down this year, according to The New York Times.