Summer foods: Okra love it or hate it 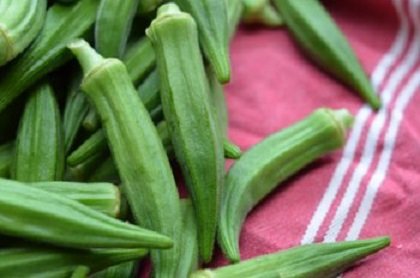 Folks either love okra or they hate it. No one - veritably no one - is in the middle. Virginia Willis

CNN — In this series for the Southern Foodways Alliance, I am examining iconic Southern foods that so completely belong to summer that if you haven’t relished them before Labor Day, you should consider yourself deprived of the entire season. My plan is to share a little history and a few recipes that I hope you will enjoy.

This week, it’s all about okra.

Ok, I know, I know. Stop. You either love okra or you absolutely hate it, and you’ve already decided to click away. Stay. Please, please stay. I’ve got this, really, I do. Okra is the new asparagus. Seriously. I’m certain of it.

I’m an official okra missionary. I am here to convert—and I can even help you past the slime. Coincidentally, I’ve recently written an entire book about okra for The University of North Carolina Press series called "Savor the South" that will be out in spring 2014. Other ingredients that are featured in the series include tomatoes, buttermilk, pecans and sweet potatoes. The deal is, I asked for this crazy, argumentative topic. I chose okra over bourbon! And, through this blog post for SFA you have a sneak peak at what I’ve learned becoming one with okra.

This is what I know: Okra is a controversial vegetable. It is as much a part of Southern cuisine as collard greens and fried chicken. But in the Southern kitchen, it is far more controversial. Folks love okra or they hate it. No one -- veritably no one -- is in the middle.

I also know this: Okra lovers passionately love okra in all manners of all shapes and forms. Boiled, fried, steamed, grilled, broiled, pickled, whole, sliced and julienned. I love it raw in a salad. You name it, okra lovers love okra. Those who hate it think it’s slimy, gooey and gummy. Some even go as far to call it “mucilaginous ick.”

In my opinion, they haven’t met the right okra.

According to The New Encyclopedia of Southern Culture, African slaves brought okra across the Atlantic Ocean during the slave trading era. Little is known about the early history and distribution of okra, but it is thought to have originated in equatorial Africa. It eventually made its way into Northern Africa, the Mediterranean and India before its journey across the Atlantic to the New World.

Okra is a main component in gumbo. There are two main considerations for the etymology of the word “gumbo.” The first suggests that in Bantu, the language family of Southern Africa, which includes Swahili, okra is called ngumbo, and this is where gumbo originates. The second is that “gumbo” is believed to be a corruption of the Portuguese corruption, quingombo, or the word quillobo, native name for the plant in the Congo and Angola.

Okra is not, however, solely found in the American South or in Africa. The ancient routes by which okra was taken from central Africa to Egypt to the eastern Mediterranean and to India is not certain, but we do know that okra is found in abundance in three major areas today -- East Africa, India and Southeast Asia. It is also found in pockets in the Caribbean, as well as in South America.