Grant Show takes on a leading role in “Devious Maids” 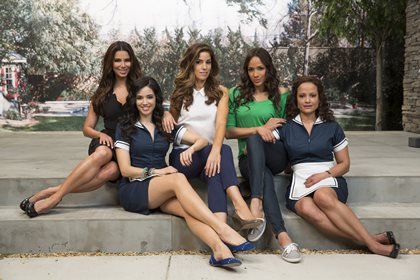 The cast of "Devious Maids" from left: Roselyn Sanchez, Edy Ganem, Ana Ortiz, Dania Ramirez and Judy Reyes. TV history will be made Sunday night with the premiere of "Devious Maids," the first prime-time program featuring an all-Latina leading cast. But even before the first episode has aired, the Lifetime show is receiving a slew of criticism. Courtesy Lifetime

Known as Jake Hanson in the series, “Melrose Place,” Grant Show is now the leading man in the new primetime series, “Devious Maids” airing on Sundays on Lifetime, which is produced by Eva Longoria and Marc Cherry, both of the hit show “Desperate Housewives.” 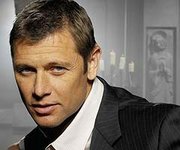 Grant Show is the new leading man on the primetime show "Devious Maids."

“Marc Cherry has his own style,” Grant Show said about working with the producers on the “Devious Maids” project. “It’s dramatic but there is lots of comedy.”

Show plays Spence Westmore in the primetime series where murder and mayhem is the norm.

“The last 10 years I’ve played bad guys, arrogant and full of themselves,” he pointed out. “Spence is a sweet, sweet guy trying to do right by the kids, but his wife is not a sweet person so he goes to the maids.”

The maids are working in a world of incredible wealth in stark contrast to their own lives, which breeds desperation and desperate people do desperate things!

Grant Show’s hunky role in “Melrose Place,” the “90201” spin-off, placed him front and center before more than 10 million devoted viewers each week. He also appeared in “Private Practice,” “Six Feet Under,” and the 2012 box office hit The Possession with Kyra Sedgwick.

The Pulse of Entertainment is written weekly by Eunice Moseley. She is also a PR/Business Management consultant. For more entertainment news, visit: www.ThePulseofEntertainment.com or www.FreelanceAssociatesInc.com.