Many events planned for March on Washington 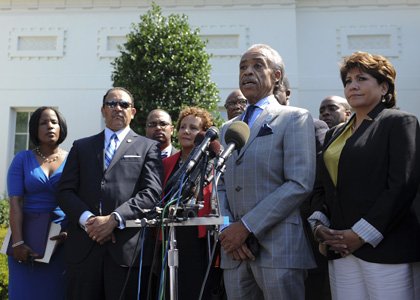 WASHINGTON (NNPA) — In addition to the long-planned March on Washington scheduled for Saturday, Aug. 24, the White House has announced that President Obama will speak at a commemorative service at the Lincoln Memorial on Aug. 28, the 50th anniversary of the March on Washington for Jobs and Justice.

“National Action to Realize the Dream March” on Aug. 24 will be co-chaired by Al Sharpton and Martin Luther King, III. According the list of speakers announced thus far, it will be held in the spirit of the original march. On the other hand, the King Center in Atlanta, headed Bernice King, is more commemorative. It is celebrating Dr. King’s “I Have a Dream” speech by asking communities to organize “Let Freedom Ring” bell-ringing events on Aug. 28 at 3 p.m. Eastern Standard Time to observe the exact time Dr. King delivered his historic address.

The Let Freedom Ring” commemoration and call to action” will be held on the National Mall in Washington, D.C. on August 28. The program begins with an interfaith service from 9 a.m. to 10:30 a.m. at the Martin Luther King, Jr. Memorial on the National Mall, followed by the “Let Freedom Ring” ceremony at the Lincoln Memorial from 1 p.m. to 5:30 p.m.

President Obama is scheduled to speak at the steps of the Lincoln Memorial.

With one member of the King family – Martin III – helping lead the Saturday march and another – Bernice – the driving force behind the March 28 event at the Lincoln Memorial, some supporters are worried that holding two separate marches might reduce attendance at each event, sending the wrong message about Blacks’ determination to fight regressive actions and court decision.

Trying to put the best face on the situation, organizers argue that because the Obama announcement came so late, it will not interfere with the Aug. 24 march because those planning to attend have already solidified their transportation and hotel plans.

Both the Southern Christian Leadership Conference (SCLC) and the Bayard Rustin Institute are holding their annual conventions in Washington that week.

Obama’s speech will culminate a week of activities centered around the original march. Among the events planned:

Hosted by the National African American Clergy Network. Open to the public

Celebrating the Legacy of Women in the Movement

Women in the Movement: Past, Present & Future Intergenerational Roundtable

Celebrating the Legacy of Youth in the Movement