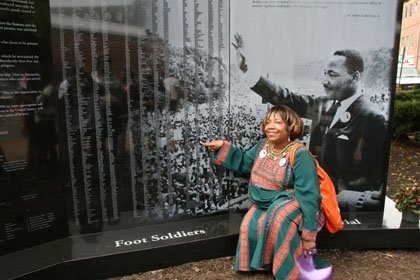 ANNAPOLIS — Wednesday, August 28 marked the 50th anniversary of the March on Washington. To commemorate this milestone, the Annapolis-based Dr. Martin Luther King Jr., Committee, Inc. unveiled the nation’s first memorial to the 250,000 “foot soldiers” of the March – the ordinary citizens who marched in the demonstration and risked the threat of personal harm to underline support for the civil rights leaders who spoke that day. The Civil Rights Foot Soldiers Memorial, which includes the names of more than 500 foot soldiers was unveiled Wednesday at Annapolis’ Whitmore Park, the site of a bus depot from which Annapolis residents traveled to the March.

At a recent meeting with the leadership of Civil Rights Foot Soldiers Memorial Rep. John Lewis (D-GA) endorsed the Memorial. During the 1963 March on Washington Lewis was, at 23, the youngest speaker and a member of the “Big Six” March organizers as the Chairman of the Student Nonviolent Coordinating Committee (SNCC).

During the August 22 meeting in his office in Washington Lewis said, “As the last living speaker from the 1963 March on Washington I am proud to be on the memorial that the Dr. Martin Luther King Jr., Committee will unveil as the nation’s first to the 250,000 “foot soldiers” of the March – the ordinary citizens who risked the threat of personal harm to magnify the impact of the words of the civil rights leaders who spoke that day. These men and women played an important role in the passage of the Civil Rights Act of 1964 and the Voting Rights Act of 1965.”

The foot soldiers honored on the memorial come not only from Annapolis, but from all over Maryland as wells as other parts of country. “We honor those leaders and “soldiers” in the war against racial discrimination that made possible the second Emancipation Proclamation to end racial segregation and discrimination, just as the first Emancipation Proclamation in 1863 led to the end of slavery in the US,” said Carl Snowden, Chairman of the Martin Luther King Jr. Committee.

The Committee Inc. has successfully placed two other memorials to the legacy of Martin Luther King, Jr. in Anne Arundel County – both funded by private donations. A bronze statue of King was erected at Anne Arundel Community College in 2006 after the Committee raised more than $250,000. In 2011, the Committee dedicated a plaque and garden tribute to Dr. King’s wife, Coretta Scott King, at Sojourner Douglass College in Edgewater, MD (just south of Annapolis).

Snowden spearheaded both these efforts. He envisions that the most recent monument will not only commemorate the contributions of ordinary citizens, but educate, and hopefully inspire, another generation to take up the cause of equality for all people.