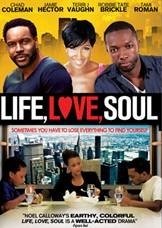 The topic of absentee fathers has become a universal discussion across the country. Recently Oprah Winfrey’s OWN Network dedicated a two-part series on “Oprah’s Lifeclass” to the subject of fatherless sons.

Although, it may not be an issue in every household, the topic resonated with director/writer Noel Calloway and led him to write and direct his first film “Life, Love, Soul.”

Calloway grew up in Harlem, New York in the foster care system because both of his parents were incarcerated. Despite his difficult childhood, Calloway finished high school and further pursued his education at Clark University in Atlanta, Georgia where he studied film.

“My passion behind creating this film was not only a direct reflection of my upbringing, but also seeing how many of my peers lived in households where the fathers were completely absent from their lives. Some never knew who their fathers were so it became more evident to me that there weren’t many men present in the household to teach the essentials from raising a boy into a man or a girl into a woman as well,” Calloway said.

According to the U.S. Census Bureau, out of 24 million children in America, one in three lives in a home without the presence of their biological father.

Calloway ent on to say that, “An absentee father or a fatherless son is a familiar connection with the imagery of African American males, which is depicted in entertainment. Those roles need to be changed by showcasing more positive images of African American men who can be considered roles models.”

Calloway’s film “Life, Love, Soul” drew in a number of talented actors including Chad Coleman (“The Walking Dead” and “The Wire”), Jamie Hector (“Night Catches Us” and “The Wire”), Terri J. Vaughn (“Meet The Browns”), Tami Roman (“Basketball Wives”), as well as up and coming actress Robbie Tate-Brickle.

In addition, Grammy award winning singer/songwriter Valerie Simpson of Ashford and Simpson made her acting acting debut in the film.

“Life, Love, Soul” was released on Tuesday, August 27, 2013 and is available for sale at Walmart, Amazon.com, as well as iTunes. For more information visit: www.noelcallowayfilms.com