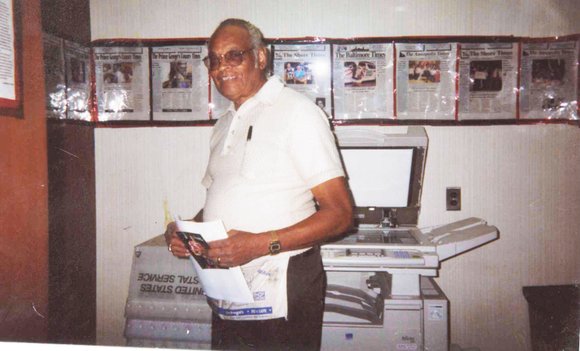 “Those we love don’t go away, they walk beside us every day. Unseen, unheard, but always near; still loved, still missed and very dear.” —Anonymous

As one of the former staff writer’s at The Baltimore Times, I have been asked to write many stories before, but this is by far the hardest. How do you put into words what a person means to you, especially when that person is Freddie Howard, affectionately known as “Mr. Freddie” to all who knew and loved him. Learning of his passing has broken my heart, but I am flooded with so many memories of a man, who from day one treated me, and everyone he knew like family. You would be hard pressed to find anyone who knew Freddie, speak an unkind word about the man who lived and breathed the newspaper business.

Freddie was such an intricate part of The Baltimore Times, it’s hard to believe that he is gone. In the 22 years he worked for the paper, Freddie loved what he did. He enjoyed seeing the final product hit the streets (he also delivered the papers to the boxes every Friday). Freddie believed in The Baltimore Times. It did not get any better than being part of a paper that printed “Positive Stories about Positive People”. He was proud of the Baltimore Times because we truly put thought into every story and took responsibility in what we gave to the public. We were a small staff, but the love for the paper showed whether you wrote, designed or worked in sales. It is a family-owned paper, and we were family.

“Freddie was my mentor and my friend. He taught me most of what I know about the newspaper business. I enjoyed listening to his many stories when he was in the mood to reminisce, particularly about how he got started in the printing business. He told me that once you have ink in your blood, you can’t get it out. And he was right. It’s still in my blood after twenty years.

“He didn’t talk a whole lot, but he cared a lot and when he gave advice you could take it to the bank. One of our favorite conversations always took place around this time of year, when we would “bet” each other who would win the different tennis matches on television.

I will miss Freddie, but I am honored that our paths crossed. His wisdom and love will live on forever in my heart,” said Dena Wane, director of Special Projects at The Baltimore Times.

Even as some of us moved on, I continued to stop by the paper because they were a second family. And to be honest, my daughter Myra, who is an honorary “Baltimore Times baby,” (as owner and publisher Jocelyn “Joy” Bramble called every child born to a parent who worked for the newspaper) always wanted to visit. Even if we got close to 25th and North Charles, Myra just had to go see everyone, especially Mr. Freddie. I honestly think it had more to do with the bags of candy and fruit he gave to her, if you ask me. But I know even if he did not have treats, she would want to visit her friend.