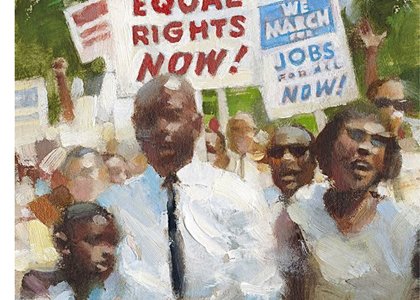 WASHINGTON — Actress Gabrielle Union says she is blessed to have participated in the historic unveiling of a new stamp by the United States Postal Service that pays homage to the civil rights movement as anniversary celebrations continue throughout the District.

“It’s cool that people are banding together to commemorate this life-altering event.”

The limited edition stamp that contains the word, “Equality,” was unveiled in time for the 50th anniversary of the March on Washington for Jobs and Freedom.

“Equality has a stamp of its own,” said Rep. John Lewis (D-GA), the only surviving speaker of the original march in 1963. “It is so appropriate and so fitting for the United States Postal Service to issue this Forever stamp on the eve of the 50th anniversary of the March on Washington.”

“The march was one of the turning points in the on-going struggle for civil rights and social justice in America,” Lewis continued. “In the years to come, when individuals use this stamp, they will be reminded of the distance we have come and the progress we have made as a nation. And they will be reminded of the civic duty of every American to stand up for what is right in our democracy.”

The Postal Service unveiled the stamp artwork with the help of individuals from across the country. Various residents from Washington, D.C., New York, Los Angeles, Baltimore and other cities added photos to the Postal Service’s Facebook page as the government agency designed the new memento.

“It’s an honor to dedicate a stamp that commemorates what Dr. Martin Luther King described as the greatest demonstration for freedom in the history of our nation, said Deputy U.S. Postmaster, Ronald Stroman. “The U.S. Postal Service takes great pride in being able to recognize historic events by issuing these limited-edition stamps commemorating America’s best.”

Under the art direction of Antonio Alcalá of Alexandria, Virginia, stamp artist Gregory Manchess of New York, depicted marchers against the background of the Washington Monument. Placards calling for equal rights and jobs for all, which counted as two principal themes of the march, are prominently displayed.

Fifty years ago, on August 28, 1963, nearly a quarter of a million people came together in Washington, D.C. to participate in the March on Washington for Jobs and Freedom. That’s where King delivered his powerful, “I Have a Dream,” speech on the steps of the Lincoln Memorial, a defining moment of the American Civil Rights Movement. King galvanized the nation with his dream of a day when “this nation would rise up and live out the true meaning of its creed: ‘we hold these truths to be self-evident, that all men are created equal,” he said.

“It’s one of those things where you’re literally joining together with people from all over the country,” Union said. “Even though 50 years have passed, we still understand there’s a lot of work to be done.”