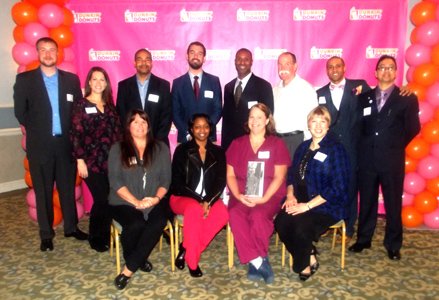 ELLICOTT CITY, Md. — Robert Cradle has provided grooming services for the homeless and children in need throughout Baltimore through Rob’s Barbershop Community Foundation (R.B.C.F). The projects sponsored by R.B.C.F. have provided over 16,000 services to 6,000 homeless and/or individuals in need.

Robert Cradle, who was among the honorees, talks about the honor during the recognition ceremony.

Recently, the barber installed a barber/beauty shop in Southeast Washington, D.C. exclusively for veterans who are suffering from homelessness. Cradle, who resides in Odenton, Maryland, was among 10 local individuals honored by Dunkin’ Donuts of Greater Baltimore. Cradle and the other honorees were presented with the “Dunkin’ Donuts Community Hero Award” at a recognition ceremony held Wednesday, Dec. 4, 2013 at Turf Valley in Ellicott City.

“It's humbling to receive this award,” said Cradle. “First of all, I've always appreciated Dunkin’ Donuts for providing major support toward focus areas such as health, hunger, safe neighborhoods and disaster relief. I am fully aware that they are selecting ‘community heroes’ because they feel that we signify the same type of good will and impact that they provide. I am honored that they think of my work in that way.”

Cradle’s other community outreach service projects also include providing free grooming services to Anne Arundel County public school students until the end of the school year who are currently suffering from homelessness.

Residents nominated more than 100 local heroes for the Community Hero program award for the outstanding work they do in the community. Each winner received $500 and “Free Coffee and Donuts for a Year” vouchers.

“I am very humbled by this award,” said Smith who grew up in Sandtown. “Anytime your work is recognized, you realize it's bigger than you. I want to put our younger people in a better situation.”

Smith’s efforts also include giving coats to homeless men at the Helping Up Mission in Baltimore and running basketball clinics in Israel as part of a goodwill delegation of current and former NBA players.

Founded in 1950, Dunkin' Donuts is a market leader in the hot regular/decaf/flavored coffee, iced coffee, donut, bagel and muffin categories. The company has nearly 10,800 restaurants in 31 countries worldwide. Based in Canton, Mass., Dunkin' Donuts is part of the Dunkin' Brands Group, Inc. family of companies.

“Today, we celebrate individuals who inspire greatness in our community as advocates and leaders,” said Dunkin’ Donuts franchise owner Supid Patel. “We have here the best of the best.”