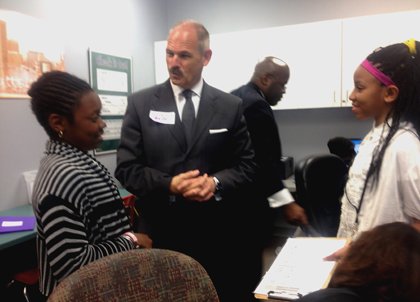 A native of Anne Arundel County, Maryland, Bertamini is actively involved in the community. He serves as a board member of several organizations including the Furman L. Templeton Preparatory Academy located in the 1200 block of Pennsylvania Avenue in West Baltimore. He has received many awards in recognition of his community service. Courtesy photo

BALTIMORE — Over 37 years ago, Andrew Bertamini began his career as a teller with Union Trust Bank (now Wells Fargo). Today, the Anne Arundel County native serves as regional president for Wells Fargo’s Maryland Region. With $1.4 trillion in assets, Wells Fargo ranked first among all financial services companies in market value in the U.S. and third in the world as of December 31, 2012.

Bertamini’s primary focus is to oversee the operations of the Maryland market and to serve as the company’s community ambassador.

“I work for a company that supports me in being active in the community,” said Bertamini. “As regional president for Wells Fargo, I primarily operate the Maryland operation for Wells Fargo, and serve as an ambassador for working with the community and elected officials to ensure we are being a good corporate citizen.”

In talking about his involvement at Furman L. Templeton, which is located in the 1200 block of Pennsylvania Avenue, he said, “The school has 450 students, and all of them are low-income children,” said Bertamini. “We work really hard to support the school and to help these children. We work on financial literacy, and have Saturday School volunteers, among other things. I believe education is the key to changing lives.”

Bertamini, 57, also played a major part in bringing The Kinsey Collection: Shared Treasures of Bernard & Shirley Kinsey - Where Art & History Intersect to The Reginald F. Lewis Museum in downtown Baltimore. The highly acclaimed collection of art and artifacts chronicles over 400 years of African American history and culture and honors the 150th Anniversary of the Emancipation Proclamation.

“I work closely on a number of initiatives to help and change the community,” he said. “This includes working with the University of Maryland School of Social Work, and with religious and business leaders to focus on making a positive difference.”

According to Bertamini, efforts also include working with the Upton community to prepare a plot for the community to grow healthy food; assisting a different non-profit monthly; organizing a bankers job fair; and trying to find jobs for young people in the banking field through Mayor Stephanie Rawlings-Blake’s Hire One Youth Program.

Bertamini also chaired Mayor Rawling-Blake’s Journey Home Program, a 10-year initiative to end homelessness in Baltimore. “Everyone should have a place to call home,” said Bertamini. “I love every aspect of it. I grew up in a single parent household myself. It’s my way of paying back.”

Bertamini’s work hasn't gone unnoticed. He is the recipient of the 2010 Greater Baltimore Committee – Bridge the Gap Award; and in 2012 was recognized as a Daily Record Influential Marylander and a Most Admired CEO; received the Baltimore Urban League Whitney M. Young Award; and a Smart CEO Circle of Excellence – Philanthropy Winner.

Bertamini is a graduate of the University of Maryland University College and holds a bachelor’s degree in business management.

“I have a real passion around how we can make a difference if we work together,” said Bertamini.