Sweet Honey in the Rock: 'Celebrating the Holydays' at Maryland Hall 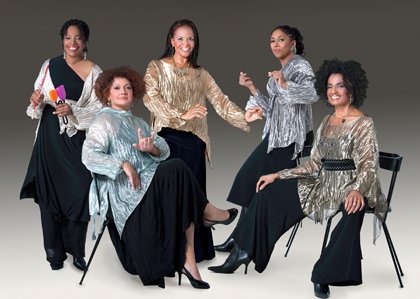 ANNAPOLIS — Internationally-renowned a cappella ensemble Sweet Honey in the Rock will perform at Maryland Hall for the Creative Arts on Sunday, December 8, 2013 at 7 p.m. Sweet Honey in the Rock: Celebrating the Holydays is a one-of-a-kind seasonal concert that celebrates music from many faiths around the globe. Featuring stunning vocal prowess rooted in the rich textures of African American legacy, this powerhouse group will perform a joyful blend of holiday favorites.

Challenge and change are the themes underlying the 39-year career of the revered female African American a cappella ensemble. In the course of creating its adventurous and diverse mixture of blues, African, jazz, gospel and R&B music, with excursions into symphonic and dance-theater, 23 vocalists have passed through the group, formed as a quartet in 1973 at a workshop at the D.C. Black Repertory Theater Company in Washington. Dr. Bernice Johnson Reagon, Carol Maillard, Louise Robinson, and Mie drew their name from the first song they learned, “Sweet Honey in the Rock,” based on a biblical psalm. “Sweet Honey speaks of a land that is so rich when you break the rocks open, honey flows. And we thought it was something like us African American women – strong like a rock – but inside [there’s] honey,” explains Robinson.

The ever-growing list of the group’s musical and activist achievements since its creation is beyond stunning. The ladies have performed in Nairobi and Beijing at the U.N. World Conference on Women, toured the UK, Japan, Africa, Australia and various European locations, been the subject of two PBS documentaries “Gotta Make This Journey” and “Sweet Honey in the Rock: Raise Your Voice,” recorded film soundtracks, received Grammy nominations for several of their albums for children, and shared a Grammy Award for their participation in the multi-artist record “Folkways: A Vision Shared – A Tribute to Woody Guthrie and Leadbelly.” They again honored Guthrie in a Centennial Celebration of his birthday presented at the Kennedy Center in Washington in November 2012.

Sweet Honey in the Rock is a performance ensemble rooted in African American history and culture. The ensemble educates, entertains and empowers its audience and community through the dynamic vehicles of a cappella singing and American Sign Language interpretation for the Deaf and hearing impaired. Sweet Honey’s audience and community comes from diverse backgrounds and cultures throughout the United States and around the world, and includes people of all ages, economic/education/social backgrounds, political persuasions, religious affiliations, sexual preferences and differing abilities.

For more information or to purchase tickets, call 410-280-5640 or visit: www.marylandhall.org. Maryland Hall for the Creative Arts is located at 801 Chase Street in Annapolis.