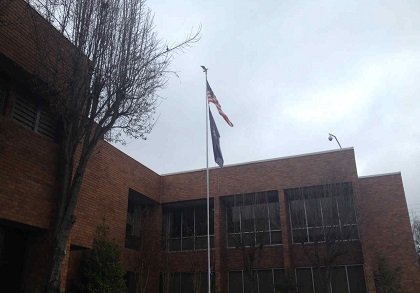 A South Carolina sheriff is refusing to lower the American flag in tribute to Nelson Mandela, saying the honor should be reserved for American citizens. WHNS

CNN — A South Carolina sheriff is refusing to lower the American flag in tribute to Nelson Mandela, saying the honor should be reserved for American citizens.

But Pickens County Sheriff Rick Clark says not in his department.

"It's just my simple opinion that the flag should only be lowered to half-staff for Americans who sacrificed for their country," Clark told CNN affiliate WHNS.

It should be lowered at the U.S. Embassy in South Africa, he said, but not at home.

The flag in his department was lowered over the weekend to honor a fallen law enforcement officer and for Pearl Harbor Day. But it will stay up Sunday, he said.

A spokesman for the department said the sheriff cannot be disciplined.

"He's not breaking a law. It's his decision. And I support the decision of the sheriff," Chief Deputy Creed Hashe said.

Mandela became the symbol of the fight against racial discrimination in South Africa and served 27 years behind bars for defying the apartheid government. He died Thursday at age 95.

Though rare, the lowering of flags for foreign citizens is nothing new.

George W. Bush did it for Pope John Paul II eight years ago. Bill Clinton did it when former Israeli Prime Minister Yitzhak Rabin was assassinated in the 1990s.

In fact, the practice goes as far back as 1965, when President Lyndon Johnson ordered flags lowered for former British Prime Minister Winston Churchill.

But not all world leaders get the honor.

This year, Obama issued a statement expressing his condolences for the death of former British Prime Minister Margaret Thatcher. But he did not order the flag lowered.

American presidents can issue the executive order at their discretion, the Flag Code states. In general, presidents reserve the honor for major national figures, including governors and foreign dignitaries.

The code says it's only a guide and it does not offer penalties for noncompliance.