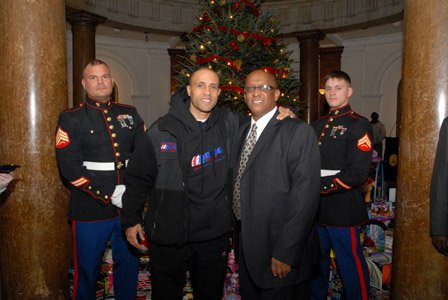 Thanks to the generosity of local corporations, Council President Young was able to purchase hundreds of toys, like LEGO sets and skateboards, which were on display during a holiday reception at City Hall on Tuesday, December 10, 2013.

Members of the general public were invited to bring one unwrapped children’s toy to gain admission to the event and enjoy live music and delicious food from some of Baltimore’s best restaurants. Council President Young welcomed special guest Gerrard Sheppard, wide receiver for the Baltimore Ravens.

“Our goal is to pack City Hall full of wonderful toys that will ultimately put smiles on the faces of very deserving young people,” Council President Young said. “During this holiday season this is one small way for us all to show that Baltimore cares.”