Is Frederick Douglass High School due for another name change? 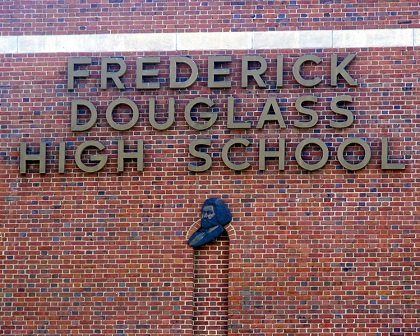 Is Frederick Douglass High School due for a name change? Marylandstater, via Wikimedia Commons

“What’s in a name? That which we call a rose by any other name would smell as sweet.” --Juliet

Even though Shakespeare’s Juliet might disagree, in today’s world the name given to a business, product or service can directly influence its success or failure. This can be true as well for a public institution such as a high school.

Judging by glowing reports from the US Department of Education, Baltimore’s Frederick Douglass High School is in the process of a major turnaround. With its academic reputation on the upswing should Douglass, which was originally known as the “Colored High and Training School” consider changing its name?

If you question the importance of a name, consider the original monikers of these iconic Internet companies. The second largest search engine was first called “Jerry’s Guide to the World Wide Web” before it became Yahoo. Though the name described the product perfectly it was too cumbersome. Google, the world’s biggest search engine was first called “BackRub.” It’s funny to picture millions of people “rubbing” for information instead of googling it.

Longtime Baltimore residents know Douglass has seen some tough times; there’s no need to give a laundry list of the school’s troubles. Now, the nation’s second oldest historically integrated public high school seems to be moving in the right direction. The Department of Education says Douglass “with the help of a $4.2 million dollar federal School Improvement Grant (SIG) has cut its dropout rate in half and has seen test scores rise dramatically in 2011.”

The education department reports “Dr. Antonio Hurt, who took the helm at Douglass during the first year of the school’s SIG program, opened a night school where students can get tutoring or take credit recovery classes so they can graduate on time. He created a dual enrollment program where Douglass students can earn college credits at nearby Baltimore City Community College.”

These initiatives sound quite promising, and without a doubt these programs could be of great benefit to students from all over the city. However, given the school’s reputation for violence there are parents who would be reluctant or unwilling to send their child to Douglass.

Baltimore has a long history of changing the name of a public school after a once vibrant community falls on hard times. Too often the neighborhood’s problems seep into its schools. A few well-publicized acts of violent crime can quickly ruin a school’s reputation. The mere mention of certain high schools conjures images of rowdy students, low-test scores and high dropout rates.

With few exceptions, such as City College, Poly/Western, and Patterson, the buildings that housed some of the city’s most popular high schools are still standing. But, nearly all have been re-named, re-configured and/or re-constituted. For example, Northern High became home to two high schools, Reginald F. Lewis and W.E.B. DuBois. Walbrook High School after several name changes is now Civitas Middle/High School and Lake Clifton is Heritage High.

I don’t mean to suggest that something as superficial as a name change will make a failing school successful. However, a new name can signal to the community serious change is in the works and be more inviting to the public as the school’s new mission is being implemented.

After the first year of turnaround efforts, the education department reports Douglass “increased proficiency rates in English language arts from 41 percent in 2011 to 53 percent in 2012. Math proficiency rates rose from 32 percent to 44 percent.” Dr. Hurt says, “While there’s still plenty of work to be done, the school’s 2013 numbers are promising, too.”

I know there would be push back from alumni, but perhaps a new name is just what Douglass needs to attract the next generation of scholars such as its most illustrious graduate Thurgood Marshall, the first black Supreme Court Justice. It must have been a bold step in 1889 to change the school’s name from “Colored High and Training School” to Frederick Douglass High School. Now, 124 years later could be the perfect time to select a name to help move this once venerable institution into the 21st Century.

Jayne Matthews Hopson writes each week about education matters because “only the educated are free.”