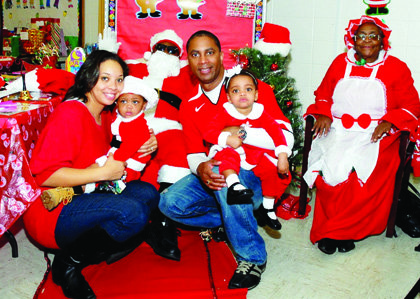 Shawn and Tonya Sanchez along with their children, Shawn II, and Cataleya spent time with Santa and Ms. Claus at the ‘Breakfast with Santa’ event held at the Metropolitan United Methodist Church of Severn on Saturday, December 14, 2013. Gar Roberts

SEVERN, Md. — Santa Claus and Mrs. Claus came to town! That is they came to Queenstown Road in Severn, Maryland. Youngsters and adults at the Metropolitan United Methodist Church of Severn joined them for “Breakfast with Santa” on Saturday, December 14, 2013. Rev. Frances W. Stewart pastors the church.

The weatherman predicted snow for the morning, and there were some folk who wished it would snow. They thought Santa would feel more at home if it was snowing when he arrived. However, Santa and Mrs. Claus seemed to feel right at home as they walked down the red carpet to their comfortable chairs, as children shouted with glee.

After eating a delicious breakfast prepared by the men of the church, the children participated in many activities that delighted their little hearts and hands. They watched holiday classics including “Rudolph the Red Nosed Reindeer.” They also wrote letters to Santa, made ornaments and played Pin the Nose on Rudolph. The Christmas piñata that exploded into a multicolored candy scramble was a highlight for the children.

The fellowship hall was full of laughter and excitement as Santa handed out a bag of candy and a toy to each child. Adults joined in the holiday spirit too, playing games for prizes and singing Christmas carols along with a musician.

The members of Metropolitan United Methodist Church truly remembered the reason for the season as they celebrated with laughter and fellowship.