10 most Christmassy destinations on the planet 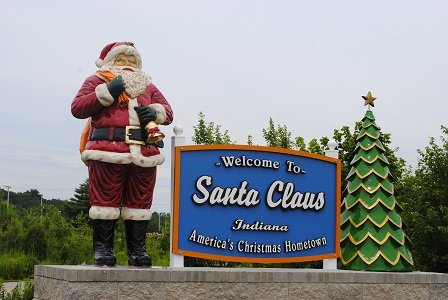 The Three Kings parade through the streets in a magnificent cavalcade of floats. Canons are fired and fireworks are set off as the mayor hands the Magi the keys to the city. Spencer County Visitors Bureau

CNN — If your Christmas is too often one of tacky decorations, over-cooked turkey and bitter family feuds, now may be the time to put the baubles back in the attic and plan a yuletide getaway.

To help you along, we offer our top picks for the most Christmassy places around the world.

If you can manage to extend your Christmas holiday until Three King's Day, (January 5) there's no better place to catch up with Melchior, Gaspar and Balthasar than Barcelona.

On the evening of January 4, they arrive at the city's port on the the Santa Eulàlia -- their very own ship -- in bearded and velvet-robed splendor.

Canons are fired, fireworks are set off, and as the mayor hands them the keys to the city, the magic of the Magi officially commences.

They parade through the streets in a magnificent cavalcade of floats that includes camels, elephants, giraffes and dazzling costumes.

While legends dating as far back as the 1820s cite the North Pole as the official home of Santa Claus and his jolly missus, the Finns would have us believe otherwise.

For them, Rovaniemi, Lapland, located just north of the Arctic Circle, is Christmas HQ.

Other area attractions include the Ranua Zoo, home to baby polar bears, wolverines and moose; Sirmakko reindeer farm, where visitors can take a sled-led reindeer safari; and the Arktikum, a science center where the mystery of the northern lights is revealed.

Those in search of a truly frosty experience can stay in the Arctic Snow Hotel, made entirely of snow and ice, but equipped with saunas and hot tubs in which to thaw.

Rockefeller Center lies at the core of the New York Christmas.

Its famed ice rink has been around for 77 years; the decorated tree is an 80-year-old tradition.

Across the street, Radio City hosts the annual Christmas Spectacular, starring the Rockettes.

On the southwest corner of Central Park, Columbus Circle hosts more than 100 vendors selling clothes, gifts, snacks and drinks at the Holiday Market.

Fashion's biggest names join in the festivities, setting up impressive Christmas window displays. The most glamorous cases, at the Fifth Avenue flagships and department stores like Saks and Bergdorf, are impressive enough to melt the heart of Anna Wintour.

The Nuremberg Christmas market (Nürnberger Christkindlesmarkt) is a German institution, pulling in more than 2 million visitors each year.

Unlike all those "fake" Christmas markets that have been popping up in the region, Nuremberg's Christmas Market Council is serious about making sure only traditional handmade toys and holiday goods are sold.

The market's 200 select vendors also put up fantastic displays as they compete for the Most Beautiful Stall Design award.