Family of Nelson Mandela: His health is in God's hands now

Crowds continue to gather outside hospital 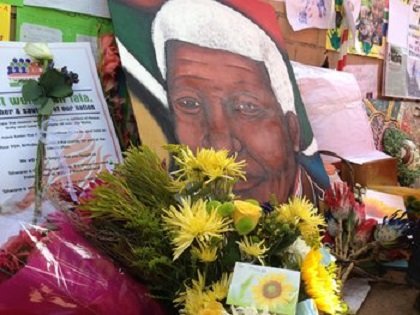 Makeshift tribute wall for Mandela outside the hospital where he has been since June 8. Dominique Van Heerden/CNN

PRETORIA, South Africa (CNN) — The former wife of Nelson Mandela visited him Sunday in the hospital where the ailing anti-apartheid icon is clinging to life, the South African Press Association reported.

Winnie Madikizela-Mandela, who was married to the former South African president from 1958 to 1996, described what it's like to see her former husband of 38 years struggle to live in an exclusive interview with UK network ITV News.

Nelson Mandela, 94, remains in critical but stable condition at a Pretoria hospital where he has been battling a recurring lung infection since June 8.

His condition worsened last week with family members saying his health was "delicate" and "anything is imminent." But daughter Zindzi Mandela told ITV between hospital visits that her father is alert and recognizes when a new person enters his hospital room.

"The one time he did speak was to tell my mom to sit down ... because she was standing at the edge of his bed," she said, laughing.

As his condition has deteriorated, South Africans have gathered outside the hospital, praying, lighting candles and leaving notes for the man they refer to as "tata," the Xhosa word for father. Those tributes continued Sunday as a Salvation Army band played hymns near the hospital and well-wishers gathered to be close to their beloved Madiba.

Winnie Mandela shot down any suggestion that the family was discussing whether to end life support.

"It was nonsense to suggest we needed to take a decision to pull the tubes," she told ITV.

Mandela became an international figure while enduring 27 years in prison for fighting against apartheid, the country's system of racial segregation. He was elected the nation's first black president in 1994, four years after he was freed. Even as he has faded from the spotlight, he remains popular and is considered a hero of democracy worldwide.

The front page of South Africa's Sunday Times earlier this month carried the headline "It's time to let him go," quoting a longtime friend of the former president as saying the time may have come for South Africans to say goodbye.

"Once the family releases him, the people of South Africa will follow. We will say thank you, God, you have given us this man, and we will release him too," friend Andrew Mlangeni told the paper.

But Zindzi Mandela told ITV that what happens now is out of the family's hands.

"When people say the family must let go, and we say let go of what? In fact he is deciding what's happening with himself. It's between him and his maker. It's not to do with us whatsoever," she said.

CNN's Faith Karimi and Samira Said contributed to this report.