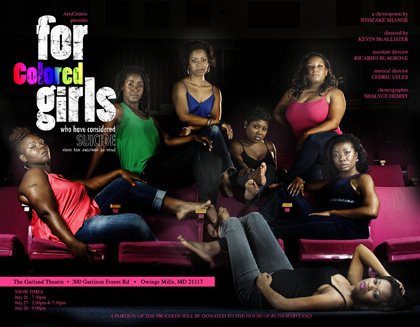 BALTIMORE — Sequina DuBose is far from uncomfortable when tackling topics that are sure to make some feel uneasy.

The actress and marketing director for ArtsCentric, a Maryland-based nonprofit production company, said audiences should likewise prepare for some interesting moments during the upcoming performance of the new play, “For Colored Girls Who Have Considered Suicide When the Rainbow is Enuf.”

“We are not doing our jobs if you’re not just a little uncomfortable,” DuBose said. “There are many strong issues in the play and we are coming from the perspective of, understanding where you are but here’s what we see.”

The provocative play, which is the mastermind of poet Ntozake Shange, will run from July 26 to July 28, 2013 at the Garrison Forest School’s Garland Theater located at 300 Garrison Forest Road in Owings Mills.

A portion of the proceeds from the production will be given to House of Ruth Maryland, a nonprofit dedicated to providing services for women and their children who are victims of domestic violence, according to DuBose.

Kevin McAllister, the Helen Hayes Award-nominated actor and director of the production, said the play will enrich the greater Baltimore community and bring awareness to women’s issues.

“This production is a tribute to all women. It’s about connecting with them in a very real, communal way,” he said.

Although suicide is in the title of the production, the issue is not tackled directly in the play.

“There are strong terms used but there is also a constant duality, especially for African-American women who deal with many challenges, obstacles and oppression,” DuBose said. “This is a strengthening and a realization that there is so much to be celebrated.”

“For Colored Girls Who Have Considered Suicide When the Rainbow is Enuf,” is a compelling series of prose, poems and stories that illuminate the identity, triumphs, struggles and inner lives of black women. Ultimately, the women discover their inner strength and love is realized.

Founded by 12 aspiring young artists and Morgan University students in 2003, ArtsCentric has become a major source of cultural enlightenment and entertainment. The

organization began as a performing arts production company dedicated to performing, promoting and preserving the arts.

“We decided that we wanted to do work that could make a difference to people,” DuBose said. Last year, the organization successfully produced the Tony Award-winning musical, “Next to Normal,” a groundbreaking show about a woman whose battle with bipolar disorder threatened to tear apart her family.

“It was well-received. It went over very well,” DuBose said.

What’s never lost on members is the community service ArtsCentric performs and encourages. In addition to donations to the House of Ruth Maryland, the organization is encouraging those who come to see the production to donate toiletries, clothing and non-perishables to House of Ruth.

The public is invited to visit ArtsCentric’s website to learn how to participate in the ticket donation program, designed to enable those who are less fortunate to attend the play.