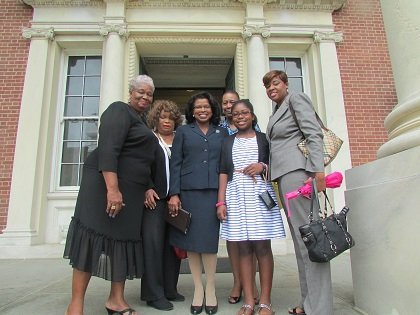 “Judge Barbera and Judge Watts represent the best of the Maryland bar and will do an outstanding job serving on the highest court in Maryland,” said Governor O’Malley. “Throughout their judicial careers, they have exhibited integrity, intelligence, and compassion. I am honored that we are not only making history today with these appointments, but that the hard work, talents and skills of these women will help us build on the progress we’re making together for the people of Maryland.”

Judge Watts will be the first African American woman to serve on the Court of Appeals. She has served on the Court of Special Appeals since January 2011. She began her legal career practicing criminal law and spent four years as an Assistant State’s Attorney for Baltimore City. She then served nine years in the Office of the Federal Public Defender for the District of Maryland, where she represented indigent criminal defendants and served as Supervisory Assistant Public Defender for her final four years.

In 1997, Judge Watts accepted an appointment as a federal Administrative Law Judge. She served as Chief Administrative Law Judge for the Office of Hearings and Appeals in Maryland from 1999-2002 until she was appointed to the Circuit Court for Baltimore City in 2002. Judge Watts served as an Associate Judge on that court from 2002 until her appointment to the Court of Special Appeals in 2011.

Judge Watts received a Juris Doctor from Rutgers University School of Law and a Bachelor of Arts from Howard University. For several years, she was an adjunct professor at the Catholic University of America, Columbus School of Law, where she taught trial practice. Judge Watts was awarded The Daily Record’s Leadership in Law award in 2011 and has been active for many years with Jack and Jill of America, Inc.