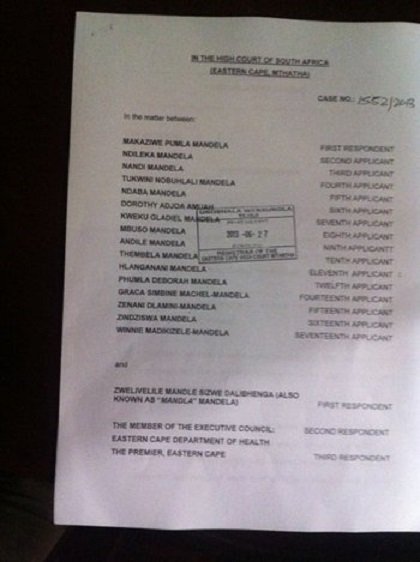 Mthatha court releases to the press on July 4, 2013, a 'Certificate of Urgency' to describe Nelson Mandela's health. Document written by D. A. Smith, (the advocate for the family) June 26, 2013, says: I (the advocate for the family ) have been advised by my instructing attorney that Mr. Nelson Mandela has taken a turn for the worst (sic) and that the Mandela family have been advised by the medical practitioners that his life support machine should be switched off. Rather than prolonging his suffering, the Mandela family is exploring this option as a very real probability. Mthatha Court

PRETORIA, South Africa (CNN) — Former South African President Nelson Mandela's health had declined so sharply last week that his family was considering whether to take him off life support before his condition improved, a court document released Thursday revealed.

The document, known as a "certificate of urgency," was filed on June 26. It stated that the 94-year-old Mandela "has taken a turn for the worst and that the Mandela family have been advised by the medical practitioners that his life support machine should be switched off."

"Rather than prolonging his suffering, the Mandela family is exploring this option as a very real probability," it added.

The following day, however, South African President Jacob Zuma announced that Mandela's condition had improved from critical to critical but stable.

Mandela remained critical but stable Thursday, Zuma's office reported after he visited Mandela. It denied reports that Mandela was in a "vegetative state."

Considered the founding father of South Africa's modern democracy, Mandela has been hospitalized in Pretoria since June 8 for a recurring lung infection -- a legacy of his years of imprisonment under South Africa's now-defunct apartheid regime.

Another document filed by his family in a burial dispute described his health as "perilous" and stated that fears that his death is drawing near are justified.

That affidavit was lodged in court this week as 16 members of Mandela's family battled his grandson, Nkosi Zwelivelile Mandela, also known as Mandla, over where three of the anti-apartheid icon's deceased children should be buried.

Mandla Mandela lost his case Wednesday, which meant the return of the remains of the three relatives to the family graveyard in Qunu, Nelson Mandela's boyhood home, could go ahead.

They were reburied Thursday in the family compound. But the dispute brought a public chiding from another hero of the anti-apartheid cause, retired Archbishop Desmond Tutu.

In a statement carried by the South African Press Association late Thursday, Tutu urged the family not to "besmirch" Mandela's name in his last days.

"Please, please, please may we think not only of ourselves. It's almost like spitting in Madiba's face," Tutu said, using Mandela's traditional clan name. "Your anguish, now, is the nation's anguish -- and the world's. We want to embrace you, to support you, to shine our love for Madiba through you."

The remains were removed from the Qunu village cemetery two years ago by Mandla Mandela and then taken to the village of Mvezo. The former South African president was born in Mvezo, but spent his childhood in Qunu.

The family affidavit lodged at the Mthatha High Court gives new insight into the seriousness of his condition.

"The anticipation of his impending death is based on real and substantial grounds," it reads.

"The applicants are desirous of burying their father and committing him to earth in which his descendants lie," the affidavit states. Family members called it "incontestable" that Mandela wants his three deceased children reburied.

"The applicants do not want a situation to be created in which Nelson Mandela's remains are committed to lie in a burial site, entirely alone and forlorn and absent from the remains of his children," the affidavit said.