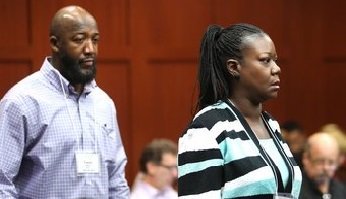 The parents of Trayvon Martin, Sybrina Fulton and Tracy Martin, arrive for the the 15th day of George Zimmerman's trial in Seminole circuit court, in Sanford, Fla., Friday, June 28, 2013. Zimmerman is accused in the fatal shooting of Trayvon Martin. Joe Burbank

CNN — The trial of George Zimmerman is already two weeks old and has seen its share of memorable moments.

The prosecution rested its case on Friday after nine days, presenting 38 witnesses and dozens of pieces of evidence. The defense has begun presenting its case. Here is a look at some of the key moments of the trial so far.

After Guy finished his opening statement, attorney Don West laid out the defense's case. "This is a sad case, of course," West said. "A young man lost his life, another is fighting for his." After that, West told the jurors a knock-knock joke.

No one in the courtroom laughed at West's joke. West later apologized saying, "No more bad jokes, I promise that. I was convinced it was the delivery."

The prosecution's star witness testified for two days about the final moments of Martin's life, saying he told her someone was following him. Jeantel's testimony is key to the state's case that Zimmerman was the aggressor in the confrontation.

When Jeantel asked Martin what the man looked like, she said he told her the man "looked creepy." "Creepy, white -- excuse my language -- cracker. Creepy (expletive) cracker."

Jeantel said she heard Martin talking to Zimmerman in the background of the call. "He said, 'Why are you following me for?' And I heard a hard-breathing man say, 'What you doing around here?' "

The defense went after Jeantel regarding the consistency of the statements she has given about the case. When cross-examined by defense attorney West, Jeantel appeared to become frustrated and agitated by his questions, often rolling her eyes on the stand and smirking when West had his back turned.

When West suggested they break for the day so she would have more time to review her deposition transcript, she defiantly told him, "No, I'm leaving today."

When West asked Jeantel if she was refusing to come back tomorrow, Judge Debra Nelson stepped in and asked West to keep the questions and answers to Jeantel's testimony.

Molly West, 24, posted a picture of her and her sister, eating ice cream with their dad. The caption read "We beat stupidity celebration cones" It also had hashtags #zimmerman, #defense and #dadkilledit.

Molly West's Instagram account has since been deactivated. In a statement, the defense said "Sometimes we're deeply disappointed by the things our children do. But we love them anyway, and we move on."

Pleasants had gotten through a few answers before he became bombarded by incoming Skype calls.

The judge told Pleasants to stop using Skype, and Pleasants later continued his testimony by speakerphone.

Zimmerman also did a videotaped walk-through at the scene of the shooting. Zimmerman pointed out where he first saw Martin, how they watched each other and how the teen allegedly circled back and disappeared before allegedly reappearing to confront Zimmerman.

Zimmerman said Martin approached him and after a verbal confrontation, Martin punched him in the nose. After Zimmerman fell to the ground, he said, Martin got on top of him and allegedly slammed his head against the concrete sidewalk.

"I tried to defend myself," Zimmerman said in his first interview the night of the shooting. "He just started punching me in the face, and I started screaming for help. I couldn't see. I couldn't breathe."

Zimmerman also said Martin noticed he was armed with a gun and tried to reach for it.

"I felt his arm going down my side, and I grabbed it. I grabbed my firearm, and I shot him one time," Zimmerman told police.

Identifying the voice is considered key to proving whether Zimmerman or Martin was the aggressor the night the 17-year-old was shot and killed.

On Friday, prosecutor Bernie de la Rionda played the 911 call for Sybrina Fulton, Martin's mother. When de la Rionda asked Fulton if she recognized the screaming voice, Fulton said it belonged to "Trayvon Benjamin Martin." During cross-examination, defense attorney O'Mara asked Fulton, "As his mother, there was no doubt it was him screaming?" She told him, "Absolutely."

Hours later, the defense called Gladys Zimmerman as its first witness. O'Mara played the 911 call and asked her if she could tell whose voice is on the recording. She confirmed it was her voice of her son, George.

When asked by O'Mara how Zimmerman could be certain, she replied, "I know because he's my son."

O'Mara said at a press conference after the day's testimony that both mothers may indeed hear their own son's voice on the 911 call.

"We have to treat them as the grieving parents they are in different ways," he said.