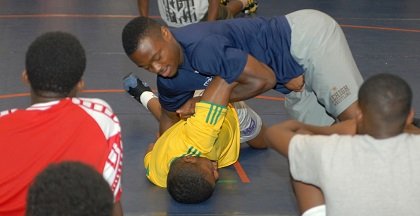 BALTIMORE — For campers at the Beat the Streets/STEM Wrestling Camp at Morgan State University the day starts out with a 7 a.m. run across campus.

It’s a rigorous beginning to a disciplined day that includes wrestling and STEM, a combination of science, technology, engineering and mathematics designed to provide a mentally and physically challenging experience for boys in middle and high school.

Campers at the Beat the Streets STEM/Wrestling camp present their research.

tate University in conjunction with the school’s the Center for Excellence in Mathematics and Science Education, includes 12 hours of math study, 30 hours of science project development and 40 hours of wrestling. It’s open to any student who is willing to try and work hard. No wrestling experience is necessary.

“We’re trying to develop them mind, body and spirit,” says Lydell Henry who co-founded the Beat the Streets Baltimore wrestling program with Hermondoz Thompson in 2012. The program, which targets low-income children in the Baltimore City public school system provides after school tutoring and wrestling instruction. This is the first year for the camp and Lydell says the goal is to help campers become better wrestlers, better students and to broaden their horizons.

Henry hopes after the experience, the boys will begin to imagine themselves as college students. He says on day five of the program he’s starting to see that happen. “Kids are starting to ask questions now, like ‘what time does campus close?’ ‘ what classes are held in this building?’ They're starting to visualize themselves here.”

Albert Woody is a volunteer at the camp and directly benefited from wrestling. The 2013 graduate of Lehigh University grew up in northeast Baltimore and wrestled with the McKim Youth Community team. He believes wrestling gave him the discipline to get a scholarship to McDonough, an elite private school in Baltimore County, and eventually a scholarship to Lehigh where he earned an engineering degree.

He says once kids get through the 11-day Beat the Streets camp, they will have a good idea of what college life is like. “If kids can come into this camp and endure STEM class and a wrestling schedule similar to college it gives them preparation for what they are in store for. If they can get through this I believe they can achieve it. “

Dr. Kevin Peters, director of the Center for Excellence in Mathematics and Science Education at Morgan State, which cosponsors the Beat the Streets camp agrees, “We believe that the same discipline that you need for wrestling you need for academics and that’s what we're trying to instill in these young people.”

Jamal Allen is a 7th grader at Parkville Middle School and has been wrestling for three years. He says he enjoys both the wresting and the STEM components of the camp. “The best part of science,” he says, “ is you get to use what you know about science in wrestling.”

For his science project, Allen and his STEM team developed a pain reliever for injured athletes. Their presentation included a skit and a detailed explanation of why their product is needed in the marketplace. Another team prepared a presentation for the Olympic committee on why wrestling should remain an Olympic sport.

“This is an excellent opportunity for kids to really learn about science research but also have fun in terms of wrestling and looking at a connection between wresting and STEM and academics,” says Peters.

The ultimate goal of the 11 day experience is to help campers become disciplined young men who can dream of achieving great things.

Tenth-grader Malik Woody attends Mt. St. Joseph High School and volunteers at the camp, “Wrestling has helped me become a better man especially with school work, it's taught me how to work hard. It’s hard work out here,” he says.

For information about Beat the Streets Baltimore visit http://www.btsbaltimore.org.