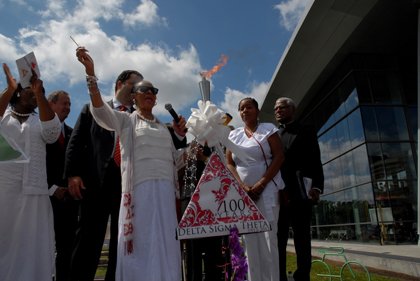 BALTIMORE — Hundreds of people gathered in Baltimore’s Inner Harbor on Friday, July 5, 2013 to welcome the Delta Sigma Theta Sorority’s traveling torch arrival to Maryland hosted by Baltimore and Annapolis chapters. The torch entered the harbor in grand style surrounded by a flotilla of yachts, welcomed by Governor Martin O’Malley and Mayor Stephanie Rawlings-Blake who gave Delta Sigma Theta Sorority the key to the city.

A reception was held at Bates Legacy Center which included a tour of the cultural center.

The Baltimore stop was one in a 22-city tour across the United States, celebrating the centennial anniversary of Delta Sigma Theta Sorority, Inc. The Baltimore/Annapolis Torch Tour culminated with a reception at the Reginald F. Lewis Museum in Baltimore before the torch headed to the sorority’s centennial celebration in Washington, D.C.

An organization of college-educated women of all ages, Delta Sigma Theta has played a significant role in politics, education and social justice since its founding in 1913. Locally, the sorority offers after-school mentorship to students, food and support to seniors and political advocacy for all Maryland residents. Delta recognized some of Maryland’s most gifted young students on STEM Celebration Day, (July 5) at Morgan State University with a presentation of the Dr. Thelma T. Daley Scholarship Award.