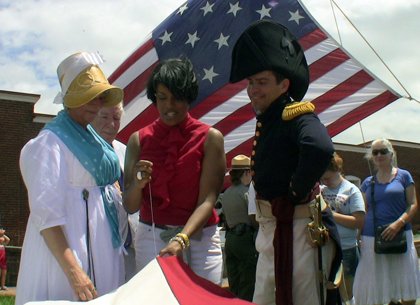 The start of the flag project was heralded with great fanfare by canon fire and living history re-enactors in 1812 era dress including the 'first stitch' sewn by Baltimore Mayor Stephanie Rawlings-Blake.

At a celebration at Ft. McHenry National Monument and Shrine on July 4, 2013 The Maryland Historical Society (MdHS) began recreating the 30 x 42 foot Star-Spangled Banner flag that inspired the writing of our national anthem. The flag, is an authentic reproduction of the original that volunteer stitchers will complete. The start of the project was heralded with great fanfare by canon fire and living history re-enactors in 1812 era dress including the 'first stitch' sewn by Baltimore Mayor Stephanie Rawlings-Blake.

“Today I have the honor of adding the ‘first stitch’ to a flag that the Maryland Historical Society and a team of over 150 volunteer stitchers are making. They are recreating Mary Pickersgill’s flag, completely by hand, using authentic fabrics and stitching techniques that Mary would have used 200 years ago. And here’s the kicker: they’re doing it in the exact same timeframe that Mary did— just six weeks,” Rawlings–Blake said.

Members of the public can sign up to help put a couple stitches in the flag during designated hours on August 3 and August 11, 2103. To register for the public days, visit: www.mdhs.org/events.

“Sewing machines were not around until the 1850s and we know Pickersgill stitched this flag, and a smaller version of it, by hand with the help of just five or six people in about six weeks,” said Kristen Schenning, director of education at the Maryland Historical Society.

The finished flag will be flown for the first time on Defenders Day in September, and then be reunited with the original at the Smithsonian in Washington in 2014.