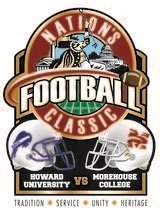 We are two months away from the start of football season here in Maryland. One of the biggest HBCU’s Highlights will be the third annual AT&T Nation's Football Classic™ in Washington DC held at RFK Stadium. Again this year, it will be Howard University vs. Morehouse College. We are expecting another action packed down to the wire game just like last year’s game.

In the 2012 AT&T Nation's Football Classic™, Howard defeated Morehouse, 30-29, before 16,911 at RFK Stadium. The game had eight lead changes, and an awesome scoring battle in the closing moments of the fourth quarter. This will be one for the ages as Morehouse looks to upset Howard this year and gain some revenge. This is something for the entire family not only for the game but the events prior, with festivities starting on Thursday:

The Baltimore Times will keep you up to date with all the latest information right up until kickoff. You can also visit: http://www.nationsfootballclassic.com/

That’s a look at HBCU sports for this week. Please send any questions, comments, or HBCU Sports and news to pdemps@btimes.com . Follow Phinesse Demps on Twitter: @lfpmedia; Baltimore Times: @baltimore_times.