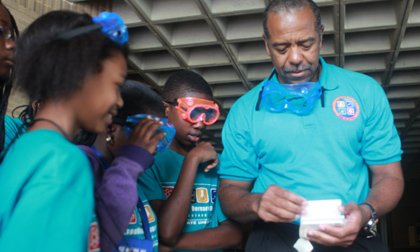 Eighteen years ago, Dr. Bernard Harris, Jr., made history as the first black astronaut to walk in space. For Harris, the experience was a high point of his life and career, fulfilling a dream that he had when he was just an eight-year-old.

Today, Harris wants African-American children everywhere to realize their dreams and one way for them to accomplish that is through education. Specifically, Harris said the road to those dreams lead through a comprehensive understanding of math and science.

“I’m not one to sit on my laurels. I continue to look for ways to expand and enable more ways for our children to be properly educated,” said Harris, who visited Bowie State on Friday, July 12, 2013 to help 50 area middle-school students sharpen their math and science skills through his Exxon Mobil Bernard Harris Summer Science Camp.

The two-week all expenses-paid program, was founded by Harris more than 15 years ago. About 20 programs are held on university campuses nationwide each summer. “It’s a hands-on approach, a team-based learning activity that is designed to reveal the science behind the latest technology, increase environmental awareness and to explore how math impacts our lives daily,” Harris said.

At the BSU camp, Harris helped to showcase an innovative curriculum, which included a “Space Day” competition where campers were challenged to create the most durable spacesuit swatch using just household items.

“It’s amazing what students can do when challenged and when motivated,” Harris said.

Born in Temple, Texas, Harris, 57, earned a bachelor’s in biology from the University of Houston in 1978. In 1982, he graduated from Texas Tech University School of Medicine and later completed a residency in internal medicine at the Mayo Clinic in Tempe, Arizona.

He was selected by NASA in 1990, two years after training as a flight surgeon at the Aerospace School of Medicine at Brooks Air Force Base in San Antonio, Texas. He became an astronaut in 1991, which led to the historic space walk in 1995. Harris retired in 1996 after more than 438 hours in space and traveling over seven million miles.

“Now, I’m trying to push STEM education and trying to focus on children in our community having better opportunities,” he said.

In 1998, he started the Harris Foundation and hasn’t looked back. “When I look at what I did with NASA, I call it my extraterrestrial mission in life. This, my foundation, is my terrestrial mission,” Harris said.

The summer courses make up an enrichment program aimed at opening the eyes of young people to college settings and allowing them to explore the challenges of math and science in an adventurous way.

“This program has really done very well especially since we partnered with Exxon Mobil about eight years ago,” Harris said, noting that the program has already helped more than 7,000 students with STEM skills. Those skills have allowed students to realize their current educational status and have a better gage on the direction in which they’re headed.