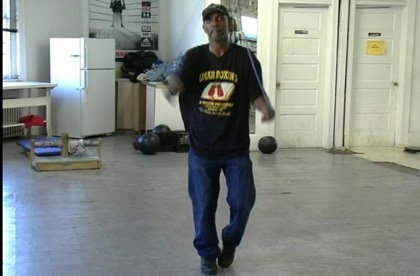 Marvin McDowell at the UMAR Boxing and Youth Development Center located at 1217 North Avenue in West Baltimore. McDowell, a Baltimore native has operated the center since 1996.

BALTIMORE — “Marvin has always been dedicated, he loves boxing and he loves the children here in Baltimore,” said Kevin Grace, an instructor and spokesman for the UMAR Boxing and Youth Development Center. Grace, who has known Marvin McDowell for quite some time is also a historian and actor, who once appeared on HBO’s “The Wire.”

He was the state welterweight champion for more than two years and was once ranked the No. 6 welterweight in the world.

“Our kids need structure and that is what we provide,” McDowell has said. “Our kids need help and they’re missing things they need to be successful in life.”

Grace said McDowell, who also cuts hair at a barbershop in the Mondawmin Mall on Liberty Heights Avenue, is viewed as a big brother and even a father to many of the children at the center.

“They look up to him. He helps to keep them focused and he makes sure that they take school and education seriously,” Grace said.

McDowell said each of the center’s participants are required to spend time doing homework. He also has a full-time teacher available to help with reading, writing, math and other subjects.

The primary mission of UMAR is to reclaim the youth of Baltimore from city streets and to prepare them for future roles as productive citizens, McDowell said. UMAR creates and maintains a positive and safe environment for children, providing multiple activities geared to improving academic, social and athletic skills, he said.

“I’m here to create not boxing champions, but life champions,” McDowell said. “All of our children need to know someone cares about them. As our organization combines academic development and athletic training under one roof, we recognize boxing is an exciting draw, but academic development is the paramount goal.”

Grace said the vast majority of those who attend the center graduate high school. He said McDowell has certainly proven to be a positive influence.

“He puts everything into it. His heart and his soul,” Grace said. “He’s done a lot and I know he’s going to keep it up.”