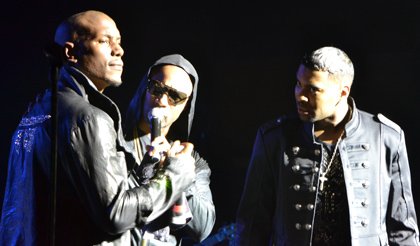 On Friday, July 12, 2013 at Pier Six Pavilion in Baltimore, I had VIP access for one the hottest concerts this summer. The concert featured R&B Sensation Avant and the NEW super group TGT made up of Tyrese (Fast & Furious and Transformer’s franchise, and Baby Boy), Ginuwine, and Tank (Preacher’s Kid). This show was strictly for the ladies with much respect to the men who came with their ladies.

The surprise of the night was Avant. Many were surprised that he even performed— and perform he did! Even though he did not have a live band (music was all on track including the background vocals), Avant did his thing. From the minute he hit the stage, the women were on their feet singing along with every verse that he belted out. Avant has a huge catalog of songs and he was batting a thousand with each and every song he sang! Avant said a few times that he wished he could have brought his band. One could only imagine how he would have taken the audience to a whole other level. Avant performed flawlessly from his tracks! Some of the songs he performed included: “4 minutes,” “Read Your Mind,” “Separated” and “Don’t Take Your Love Away.”

A native of Washington, D.C., Ginuwine,

is part of the TGT group that performed in Baltimore. After choosing straws to see who would perform first, the honors fell to Genuwine to get the crowd or should I say the ladies pumped up— 98 percent of the crowd were all women! From the ladies reaction and his NATURAL love for the fans, Ginuwine did not disappoint as he did his classic material: “Pony,” “Hell Yeah,” “Differences,” and “So Anxious.”

Next to the stage was the artist TANK who was raised in Clinton, Maryland. Tank gave the ladies plenty to scream and dream about. He showed that he definitely had the chops and also gave the ladies some eye candy when he took off his shirt a few times on Friday night. It was clear to see that he enjoyed performing for a home crowd. Tank’s set included the hits: “Maybe I Deserve,” and “Please Don’t Go.”

Finally to the stage was Mr. Film star— Tyrese, who brought charisma, style, and a charming smile to the stage and the women just went wild! Using the entire stage to his advantage, Tyrese made sure that the women got what they came for judging by their reaction to him. The numerous cell phones, cameras and I-Pads set to record mode, I am quite sure the ladies got their money’s worth. If you are wondering if Tyrese can still sing, there is no doubt after his performance at Friday’s show. His set included: “Signs of Love Makin’” “Stay,” and” What Am I Gonna Do.”

After their individual sets, Tyrese, Ginuwine and Tank, came out as the group TGT. During their performance, they paid homage to those that set the stage before them. As Tyrese said, “We want to bring back that REAL R&B sound.” The group preformed their smash hit, “Sex Never Felt Better.”

I wished that TGT has performed a few more sings from their debut CD/Digital download, “Three Kings,” which drops August 20, 2013. As an R&B Fan, Avant and TGT, continued in the tradition of not only great R&B, but more importantly, performing a LIVE show! See ya next time!

Indie Soul welcomes your questions and comments. To contact Phinesse Demps, email: indiesoul.lfp@gmail.com or call: 410-941-9202. You can follow Phinesse on Twitter: @lfpmedia; The Baltimore Times: @Baltimore_Times.