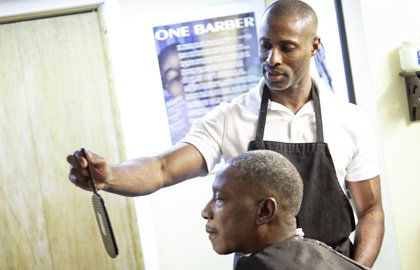 Rob Cradle cuts a client’s hair at the barbershop located at the Light House transitional shelter in Annapolis, Maryland. Cradle established Rob’s Barbershop Community Foundation in 2001 and began providing grooming services for the homeless and children in need throughout Baltimore. Courtesy photo

ODENTON, Md. — Robert Cradle has cut hair for a living for quite some time. The 44-year-old Odenton resident, doesn’t charge the homeless and the needy.

“Right around the year 2000 when I cut hair in the Odenton area, I discovered there was a homeless shelter a couple of blocks from the shop,” Cradle said. So, he came up with a plan to help the less fortunate.

He established Rob’s Barbershop Community Foundation in 2001 and began providing grooming services for the homeless and children in need throughout Baltimore.

“When I noticed the shelter, I knew there were those who couldn’t afford to go to a barber or beauty salon, so we’d collect loose change from our customers so that those less fortunate could have an opportunity to afford a haircut,” said Cradle, whose philanthropic efforts were recently recognized by the insurance giant, Allstate, as one of the company’s African American Give Back Day heroes.

Cradle has teamed up with the, “good hands,” company for a new volunteer-oriented campaign in an effort to help shine a spotlight on the remarkable stories of all the good that goes unnoticed far too often.

“There is so much bad news lately, especially in the African-American community, so I’m proud to be a part of a campaign to reward the good,” he said.

The campaign, dubbed, “Giving it Up For Good,” is an initiative to recognize unsung heroes in communities across the country— including those in Baltimore— who have dedicated themselves to spreading good by bettering their community and enriching the lives of others.

“We are encouraging people to go to: www.Allstate.com/GiveItUpForGood, to submit their stories, tweets, videos and pictures of the good happening in their neighborhoods and also to share the good on Facebook, Twitter and Instagram,” Cradle said. “That is the best advice that I can share with someone who is seeking to volunteer and help others.”

Cradle, one of last year’s designated heroes, is assisting Allstate in the selection of this year’s recipients. Three people will be chosen as “Allstate Champions for Good,” and will be honored at the Allstate Tom Joyner Family Reunion scheduled for August 29 to September 2, 2013 at the Gaylord Palms Resort & Convention Center in Orlando, Florida. The five-day event will include concerts, theme park trips and interaction with celebrities and community leaders.

Since its inception, Cradle’s foundation has helped more than 7,000 people and he continues to encourage others in assisting the less fortunate. “This makes me feel kind of wonderful that I’m giving people the confidence that they may lack,” said Cradle, who was featured a year ago in Ebony Magazine.

Cradle says that he is always looking for ways to help and connect with organizations that provide services for the homeless, the poor and the underserved. He says that Allstate has a tool on its website to assist anyone who is interested in volunteering with organizations in your area. “Just punch in your zip code and you will be directed where to go,” he said.

Cradle now has set up shops and salons at a number of homeless shelters where services are offered free of charge to men and women.

“It’s amazing! I hear it all the time about how much a good haircut helps a person,” he said.