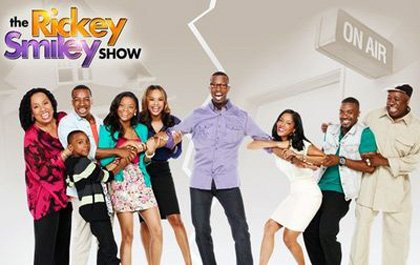 Smiley brings back a host of characters that ONLY he can do: Clarence the janitor, Pastor Watkins, Lil’Darryl, Joe Willie, and the ever so popular Sister Bernice Jenkins.

Season two debuts Friday July 26, 2013 at 9 p.m. on TV One. Check your local TV listings for the channel lineup. In the premiere episode, “The Rickey Smiley Show” capitalizes on a very SPECIAL appearance by President Obama and the presidential family. This year on “The Rickey Smiley Show,” you can expect to learn more about each character; topics dealing with politics; social issues; special guest appearances; and of course the music! By the way, Rickey is adding two more characters to the show, so you will have to watch just to see what Rickey will do next!

In other TV News, Nickelodeon launched a brand new show to its Saturday night lineup entitled “The Haunted Hathaways.” The show is centered around Ray Preston (Chico Benymon) who is a jazz musician along with sons Miles and Louie (played by Curtis Harris and Benjamin “Lil P-Nut” Flores Jr.). There is just ONE problem. They are ghosts, who must find a way to coexist with the family they live with— the Hathaways who have relocated to New Orleans to open a bakery.

The cast of "The Haunted Hathaways"

This show is aimed at the Y7-Teen viewing audience. This is a stretch for the network as they are looking to capitalize on the supernatural themes that other networks have embraced. Other story lines deal with modern topics such as divorce, death, and blended families. Parents should to view this show before deciding if the material is suitable for their kids.

This is your TV News for this week. See you next week!