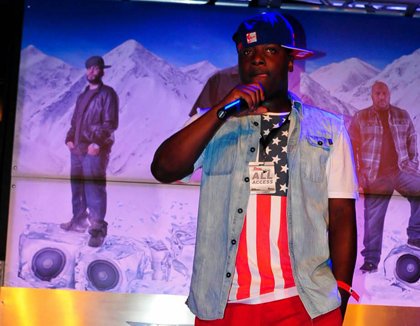 Kove, the winner of the Baltimore competition during his performance MeShenee Photography

BALTIMORE — In an industry many hip-hop artists are aspiring to conquer, The “Coors Light Search for the Coldest” competition offers individuals an opportunity to gain recognition in the music industry.

On Wednesday, July 10, 2013, the Coors Light sponsored event was held at the Baltimore Soundstage where two local hip hop artists, Kove and Aye Young Gunnah, both representing Baltimore competed on stage in front of a live audience for a chance to advance to the finals.

Although, Kove (pronounced “cuv”) will not advance to the finals in New York City, he believes the opportunity offered him the platform to showcase his talents yet again in front of the judges and a growing fan base. This is the second time Kove has made it into the semi-finals in the competition.

“When I’m on stage I get a rush of excitement and the feeling that comes over me when I’m performing is indescribable,” Kove said.

When asked what led to his involvement with the competition, Bun B said, “I embraced this opportunity because I am able to witness first hand these aspiring artists grow into their own craft. It’s amazing to see artists aspiring for better and their hopes and dreams will eventually become a reality. I want to look back five or 10 years from now

and smile knowing I was a part of when these artists performed on stage, got their time to shine and next they’ve evolved in the industry.”

DJ Drama added, “I always feel very optimistic when we come to Baltimore every year for this event because it’s a great energy and a lot of support from those who attend the event. I believe there is some really good talent not just in Baltimore, but the DMV as a whole.”

The semi-finalists which consist of aspiring artists from across the U.S. are chosen via online votes by submitting their original music to the Coors Light Search for the Coldest MC submission website. After the semi-finalists are selected, the competition tour to various cities such as Philadelphia, Chicago and New Jersey where the selected artists compete.

To learn more about the Coors Light Search for the Coldest MC Competition visit: www.searchforthecoldest.com.