Florida deputies mistake man for car thief in his own driveway

They fire at him, and two rounds hit his legs 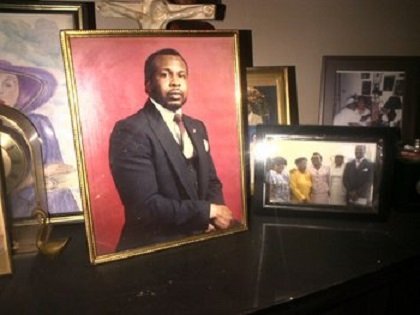 Picture of Roy Middleton, unarmed victim of shooting in Pensacola by police in his own driveway. Taken in his living room. Rich Phillips/CNN

PENSACOLA, Florida (CNN) — Was he a suspect or a victim? A Florida Sheriff says an unarmed man -- mistaken for a car thief and shot by deputies in his own driveway -- is both.

He refused to obey commands and lunged at the deputies who fired their weapons 15 times to subdue him, they say.

Roy Middleton, 60, was hit by two of those rounds in his legs. He is in good condition at a Pensacola hospital after a metal rod was placed inside his shattered left leg.

"The tragedy of this is the noncompliance to the directions of law enforcement officers," said Sheriff David Morgan of Escambia County, Florida. "Had that occurred we wouldn't be having this discussion. It's a tragedy all the way around. He is both a suspect and a victim."

The bizarre story started Saturday around 2:30 a.m. as Middleton was returning home.

Searching for a cigarette inside his White Lincoln Town Car -- he appears to have been mistaken for a car thief by a concerned neighbor who called 911. Escambia County Sheriff's Deputy Jeremiah Meeks and Sgt. Matthew White responded to the call.

This is where the story takes a fork in the road.

Middleton's family said he was not feeling well enough to discuss what happened to him.

But earlier this week, he told the Pensacola News Journal that he first thought someone was joking when they yelled at him to, "Get your hands where I can see them."

He said that as he was turning around to face deputies with his hands raised, they opened fire.

"It was like a firing squad. Bullets were flying everywhere," he told the Journal.

Deputies feared for their lives

But the deputies involved told a different story.

Meeks fired 12 shots and White fired three times, authorities said. They are now on paid administrative leave. Five of the bullets hit the White Town car, which was parked under a carport in a dark area of the property.

The deputies were in fear for their own safety, according to the sheriff.

"He came out of the car with more of a lunging motion coming out of the car, and the deputies were standing behind him and he had what appeared to be a metallic object in his hand," Sheriff David Morgan said.

But Middleton's family doesn't believe that story. His mother, Ceola Walker, 77, told CNN that her son was holding his car keys with a small flashlight on the key chain. She does not believe he lunged at deputies.

She says her son is incredibly lucky.

"They could have hit his upper body, but they didn't ....God just shielded him. I know he did, cause they was trying to kill him," she said.

Andre Lauzon, who lives next door and witnessed the incident, said it lasted less than 30 seconds.

He was out smoking a cigarette on his front lawn when the deputies arrived, he said. His view was obscured by darkness, and at one point he lost sight of Middleton.

But the sound of gunfire, he said, was deafening.

"I'm very surprised that all they did was hit him in the leg," he said.

Lauzon says his neighbor may have had trouble getting down to the ground because he was standing between his car and the wall of the carport.

"I don't have any doubt -- even not being able to see what was going on -- that he was complying with them," he told CNN. " Maybe not in the time frame that the officer was looking for -- but it seemed he was complying."

The Florida Department of Law Enforcement has taken over the investigation -- at the request of the Sheriff's Office.

"FDLE investigators are developing a timeline and conducting interviews and crime laboratory scientists are conducting lab analysis," Gretl Plessinger, a spokeswoman for the agency, said in a statement. "Once our investigation is complete, FDLE will provide the case to the state attorney's office. The state attorney will determine whether or not any laws were broken.

Walker said her son takes pain medication for a bad back. The investigation will determine whether that played a role in the incident.

"The message to the public is this was a tragedy," Morgan said. "And it was a tragedy because we had an individual, a citizen, who for whatever reason, either impairment due to alcohol or drugs, or just taking it upon himself not to be compliant to following basic direct orders."

But his mother disputes the sheriff's theory that her son was a suspect and a victim at the same time.

"How can you be a suspect and a victim at your own house? In your own yard, in your own car?" Walker asked.