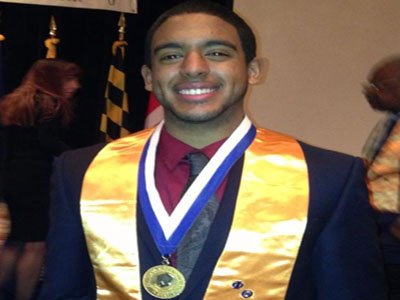 Felix Contreras, 22, is on his way to medical school.

continued — Contreras offers that his mother, who speaks little English, has experienced sub-par health care due to language barriers and a lack of cultural competence by some physicians.

“My mother is like many immigrant people who do not get adequate health care because there is not enough sensitivity to and for their realities,” says Contreras.

Eyeing Amherst College or Wesleyan University for undergraduate studies, Contreras applauds the two years spent at Atlantic Cape Community College. He insists that the supportive community college experience, coupled with his SMDEP participation has prepared him to succeed academically at a four-year college. He indicated he wants to study at Yale School of Medicine and then return that training to his Atlantic City community.

“I want to attend Yale School of Medicine— not because it's Yale— but because of what Yale SMDEP has done for me," he shares. "It is where my fundamentals were built and has paved everything for me to today.”

“All of this has made me realize, wow— I can be a leader! The little things add up to be big in the end. Sí se puede,” he says, which translates into “Yes We Can!”

Started in 1988 (formerly as the Minority Medical Education Program and Summer Medical and Education Program), more than 20,0000 alumni have completed SMDEP which today sponsors 12 university sites with each accepting up to 80 students per summer session. Now preparing for their summer 2013 cohort, SMDEP accepts applications annually November 1 thru March1. For more information about SMDEP and how to apply, visit www.smdep.org.