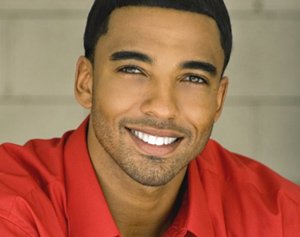 original stage play “Love Will Find A Way,” which airs again on June 15, 2013 at 5 p.m. and 1 a.m. The show originally aired in June 1st. It is the sequel to the network’s original the stage play “What Would You Do For Love.”

“Love Will Find A Way” will also air on ASPiRE.

“Swirl Films reached out to me. I read the script, saw the cast and jumped on it,” Christian Keyes said about getting the role of Reggie Brooks. “I’ve worked with Jason and Carl before. I was excited to work with them again and to work with Vanessa Simmons.”

UP’s “Love Will Find A Way” is produced by Swirl Film’s Eric Tomosunas who has produced and taped a number of stage plays and feature films for television and DVD including: “35 & Ticking,” “Love for Sale,” “A Mother’s Prayer,” and “There’s A Stranger in My House.”

“Love Will Find A Way” is the network’s 15th original stage play in its World Premiere Stage Play Series.

Born in Detroit, Keyes is a hard working and driven actor. He also has a recurring role in the BET series “Let’s Stay Together” and has been in over 40 stage productions that have taken him all over the country, including Tyler Perry’s “What’s Done in the Dark” and “Madea Goes To Jail,” which were released on DVD.

As a singer he has released three independent albums and has appeared on the covers of such national publications as “GQ,” “Elle” and “Vogue.”

“Hands down acting comes first,” Keyes pointed out when asked which talent he loves the most. “I actually get to sing in musicals and theater. I’d like to play characters that aren’t as safe as the ones that I have been doing. A burglar, bank robber— somebody shady…a bad guy.”

“Ladies Night is the black version of Magic Mike,” Keyes pointed out about his new project. “It’s a film I wrote a year and half ago starring Wesley (“The Soul Man”) and Wendy (“The Game”). [We are] still casting— we start shooting at the end of the month. I just finished filming ‘Black Coffee’…it’s a romantic comedy.”

You can follow Christian Keyes on twitter at @ChristianKeyes and learn more about the Siddeeqah “Sid” Powell screenplay “Love Will Find A Way” if you visit: www.WatchGMCTV.com.

The Pulse of Entertainment is written weekly by Eunice Moseley, who is also a PR/Business Management consultant. For more entertainment news, visit: www.ThePulseofEntertainment.com or www.FreelanceAssociatesInc.com.