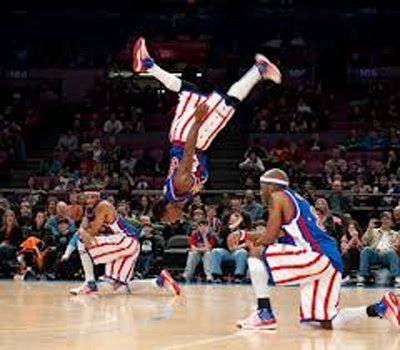 The world famous Harlem Globetrotters will bring their unmatched family entertainment to the brand new Tiger Arena at Towson University with three games in three days June 19 - June 21, 2013. Each game begins at 7 p.m. Tickets are available at Ticketmaster.com or in person from the Tiger Center box office or by phone at 800-745-3000. Courtesy Photos

Bull Bullard knows first hand the effects of bullying. Growing up, the Harlem Globetrotter basketball great spent a great deal of time in foster care programs and became a target of bullies.

“When I was younger, I was in foster care and I used to get picked on and some of my friends also were bullied,” said Bullard, who will lead the world famous basketball team into Tiger Arena in Towson for three appearances from June 19 to June 21, 2013. Each game is begins at 7 p.m.

Bullard arrived in Charm City on Monday, June 10 visiting a number of local schools to discuss the ABCs for bullying prevention, stressing Action, Bravery and Compassion. Timonium Elementary, Hampden Elementary-Middle and Padonia International Elementary were among the schools to host the Globetrotter. 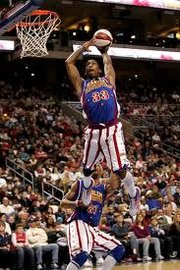 “I had one student who said he didn’t want to tell on those who were doing the bullying,” Bullard said. “I told him he has to tell, that’s how it will stop. I went to another school and within a half an hour after I left, a teacher emailed me and said one of the students wrote an apology letter on his own to all the kids he was bullying. It goes to show that our program is working.”

More than a year ago, the Globetrotters announced the debut of a community outreach program, dubbed “The ABCs of Bullying Prevention.” The team said the program was developed to discourage bullying, increase empathy among youth, and give students, teachers, and youth administrators the means to tackle the issue which has been a growing problem throughout the country.

“Sometimes, I was bullied just because of the clothes I wore,” Bullard said.

The Globetrotters plan to bring their campaign to more than 300 schools and youth centers this year as part of their “You Write the Rules” tour.

“I had my share of bullying incidents in school when I was younger,” said Flight Time Lang, another longtime Globetrotter. “It’s more serious now, especially since it happens in many forms in today’s society like online and in text messaging.”

Students frequently cite bullying as a cause of violence that they experience, and the rate at which kids are reporting this cause is increasing, according to the Globetrotters. Reaching children early in their lives can teach valuable lessons in character and empathy from positive role models.

The Globetrotters’ program involves players discussing the three key words in the ABCs and provides tools that children can use on a daily basis to reduce bullying.