“We’re taking the show in a different direction,” said Los Angeles born actress and author Niecy Nash When asked about the June 19, 2013 premiere of the second season of TV Land’s comedy series “The Soul Man.” 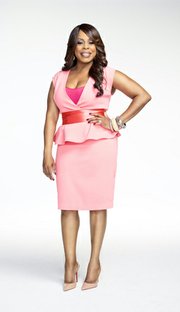 “This season…it’s better to see a sermon lived, than to hear it. It’s about life lessons.”

“The Soul Man” was created by Cedric the Entertainer and Suzanne Martin (“Ellen”), as a spin-off from TV Land’s, “Hot in Cleveland.”

Along with Niecy Nash and Cedric the Entertainer, also starring in “The Soul Man” are Wesley Jonathan, Jazz Raycole and John Beasley.

Cedric plays Rev. Boyce “The Voice” Ballantine a former Las Vegas singer who returns home to St. Louis to preach in his father’s church. Niecy plays his wife Lolli, who has to get used to a more humble lifestyle.

In her recently released book, “It’s Hard to Fight Naked.” Niecy, who was once married to a pastor and has just recently remarried, addresses issues of marriage in the book.

“It’s literally and figuratively [naked],” Niecy said when asked about the “naked” reference in the book’s title. “The figurative— is when you expose yourself [information wise], you become vulnerable and it’s difficult to fight. In the literal sense when you are naked there is not going to be a lot of time for fighting.”

The common sense of her book has everyone reading it.

“Love is the area we struggle with the most and yet it’s what we’re here for,” she said simply. “I feel blessed to have found love …and we just moved into a new house.”

Niecy is always busy with one project or another. Her career is rolling and there seems to be no stopping her.

“I recently finished a job— an HBO movie ‘Getting On,’ a very dark comedy,” Niecy pointed out when asked about new projects. “It comes from a British series of the same name. In this role I have no hair, no make up and no nails. I play a very small role; she is not over the top and sassy.”

Niecy Nash’s experience has landed her on Comedy Central’s “Reno 911,” Fox’s “Do Not Disturb” and “The Bernie Mac Show.” Her was a contestant on ABC’s “Dancing with the Stars” and she recently wrapped up filming “Nurse 3D,” a dark film about murder. Her identifiable voice can be heard on the animation “Kid Notorious,” the Cartoon Network’s “The Boondocks,” the ABC Family animation “Slacker Cats,” and the animated feature film “Horton Hears A Who,” with Jim Carey and Steve Carrell.

The Pulse of Entertainment is written weekly by Eunice Moseley, who is also a PR/Business Management consultant. For more entertainment news, visit: www.ThePulseofEntertainment.com or www.FreelanceAssociatesInc.com