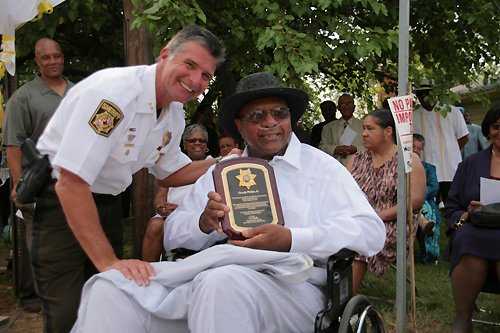 Mr. Phelps is being celebrated for many amazing accomplishments through out his life, and being the first sworn African American police officer in Anne Arundel County is one accomplishment he counts at the top of his list.

During his tenure in the Sheriff’s Department, Mr. Phelps deputized 200 special deputy sheriffs, all African American, and later maintained order for years at Carr’s Beach Club. In 1963,

because of his renowned expertise in crowd control and surveillance, he was asked to provide technical assistance and material support for the security contingent at the historic 1963 March on Washington for Jobs and Justice, led by the late Reverend Dr. Martin Luther King, Jr. As a direct result of his work, and the work of others, the March remained peaceful.

Marion Phelps also served on the Anne Arundel County Human Relations Commission for many years and was a long time, valued employee of the United States Naval Academy, serving as an EEO Officer. Mrs. Phelps was also a proud member of Zonta International, an organization founded in 1919 to advance the status of women worldwide, especially in the workforce.

In 2013, Mr. Phelps was honored by Mayor Cohen by being named as a “Living Landmark” and given an award acknowledging his sustained commitment to Annapolis’ cultural heritage.

George and Marion Phelps were married for more than 50 years until Marion’s death 2010.