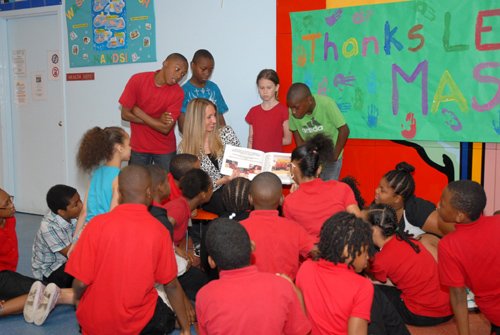 Beyers read the fairytale book authored and illustrated by the students them and then gave each student their own copy of the hardbound book. She said Legg Mason is proud to support the literacy program, “We believe exposing students to reading, creativity and the arts is integral to their education.”

Legg Mason partnered with HFI to sponsor Dr. Rayner Browne Academy’s participation in the program. In addition, two representatives from the Baltimore City School Board came to the party to support the program and partnership.

HFI educators conducted two in-school workshops for each participating class. The first class focused on the elements of a fairytale and the second class provided instruction about writing and illustrating a story. Using software provided by U Build A Book, HFI turned each class’s story and illustration into a beautiful hardbound book— each student received a copy and one will be put in the school library. HFI arranged for all the students to attend a live performance at the historic Hippodrome Theatre of the France-Merrick Performing Arts Center during the musical’s two-week run in Baltimore from January 22 - February 3, 2013.

HFI Director, Olive Waxter says, “Offering free educational programs such as ‘Bringing Enchanted Tales to Life’ enables the Hippodrome Foundation to continue to support curriculum initiatives in Baltimore Schools. Working with partners, we were able to bring more than 300 students to the Hippodrome to see Beauty & the Beast— such a nice reward for the children’s hard work and a great way to reinforce the ideas they learned in the classroom.”

Excitement is building as HFI is planning book parties and book deliveries for the other participating schools in the “Bringing Enchanted Tales to Life” program before the end of the school year.