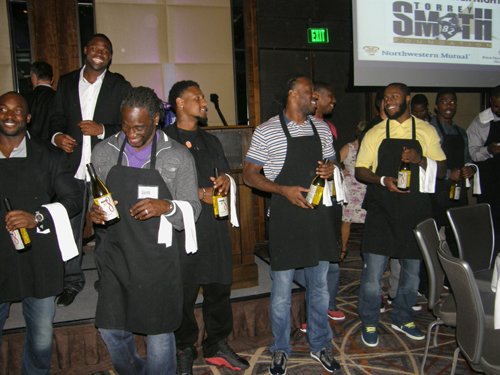 Torrey Smith (rear) was joined by several of his teammates who served Four Season cuisine wearing chef coats and aprons to those attenting the event.

Recently, several members of the team gave some VIP treatment of their own during Torrey Smith’s 1st Annual Celebrity Waiter Night. 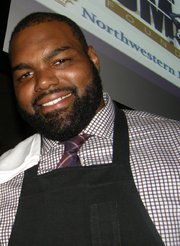 The event took place on Thursday, June 6, 2013 in the Grand Ballroom of the Four Seasons Hotel located on International Drive in Baltimore.

Approximately 225 people attended the event, and were served Four Seasons cuisine by the players, who all wore chef coats and aprons. Proceeds from the event will benefit the Torrey Smith Foundation.

The mission of the Torrey Smith Foundation is to improve the lives of at-risk families residing in Baltimore by providing support, opportunities and resources needed to excel in the classroom and in daily life.

“We want to help the kids in Baltimore,” said Smith. “Not just for one night, but after that. It’s good to give them school supplies and support them in other ways, but we also have to help them after that.”

According to Smith, who was an integral part of the Ravens Super Bowl XLVII run and ultimate victory, he wants to impact 35,000 youths in Baltimore by 2016.

“You can’t help everyone, but you want to help as many as you can,” Smith said.

Chanel Williams is Smith’s fiancée. The two will be married in July.

Torrey Smith signs autographs during the Celebrity Waiter Night to benefit his foundation on Thursday, June 6, 2013 in the Grand Ballroom at the Four Seasons Hotel in Baltimore.

“Torrey is excited about this event,” Williams said. “He loves the fans and supporting the community.”

Ravens running back Ray Rice said he was happy to support Smith’s fundraiser.

The Ravens served attendees were served hors d'oeuvres, signed autographs and took photographs during the reception, which was followed by dinner and an auction.

“Torrey is a great friend of mine,” said Ravens quarterback Tyrod Taylor. “I am very supportive of everything he does. He is always willing to do something for the community and I was glad to do it.”

Betty Buck is the Board Treasurer and Secretary of the Torrey Smith Foundation. “It’s amazing to see these young men give back to the community,” said Buck. “They genuinely love doing it.”

The day after the event, the players and the rest of their teammates were all served something spectacular at the Owings Mills training facility— their Super Bowl Championship rings. The ring is made with white and yellow gold, and contains 243 diamonds. In the center, a purple Ravens logo outlined with 40 diamonds sits over a pair of Lombardi Trophies.