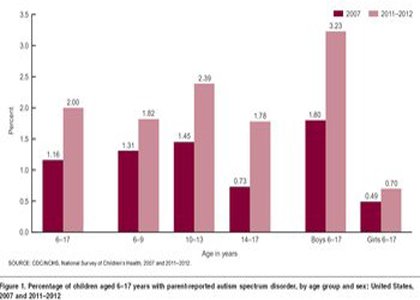 The number of children with autism is "significantly" higher than previously thought, according to a new report released by the Centers for Disease Control and Prevention. CDC

CNN — African American and Hispanic children are far less likely to be seen by specialists - for autism, but also other medical conditions - and also less likely to receive specialized medical tests than their white peers, according to a new study published Monday in the journal Pediatrics.

Dr. Sarahbeth Broder-Fingert and colleagues studied the records of 3,615 children with autism at the Massachusetts General Hospital, specifically looking at the rates of both referral to specialists and medical tests undertaken. They discovered that children from African-American and Hispanic families were far less likely to receive specialized care or specific medical tests such as a sleep study, colonoscopy, or endoscopy.

When compared to their white peers, African American children were three times less likely to see a gastroenterologist or nutritionist, and half as likely to see a neurologist or mental health specialist, according to the study. The story is similar among children from Hispanic families.

If a child has autism, the best outcomes are achieved through a combination of early diagnosis of the disorder and early intervention with behavioral therapies.

Another important element is the treatment of conditions which often coexist with autism, such as psychological, neurological, and gastrointestinal problems. A referral to a specialist is often needed.

Autism is a developmental disorder that affects between 1 in 50 and 1 in 88 children in the United States, according to the Centers for Disease Control and Prevention. It is characterized by difficulties in communication and social interaction. Coexisting neurological problems such as seizures, and psychiatric disorders such as attention deficit hyperactivity disorder (ADHD), are common and affect up to a third of children with autism. Gastrointestinal complaints such as constipation, acid reflux, and abdominal pain are also frequently seen, with symptoms reported in 17% to 85% of cases.

The exact reasons behind these findings remain unclear. One explanation may be that minority families face greater barriers in accessing specialist services. Lower numbers of local specialists, transportation issues, and lack of a regular health care provider have all been identified as problems for minority children.

Additionally. minority families may have beliefs that lead to the use of non-traditional services, or attribution of a child's symptoms to non-medical causes. Even when obtaining referral to a specialist, children from minority families can face challenges in maintaining regular follow-up.

Another issue that remains to be clarified is whether the symptoms of autism are the same across racial and ethnic groups. Some evidence suggests that there may well be differences. For instance, some research has shown that children from minority groups may have more co-occurring symptoms of aggression. If aggression becomes the dominant issue during consultations, then other medical issues may be missed, and opportunities for specialist referral lost.

One final possibility is that children from white families are being referred too frequently to specialists, with subsequent unnecessary medical investigation. This could certainly be a problem given the lack of standardized guidance on how to treat and assess medically complex symptoms in children with autism.

"This is the first study to identify these disparities in specialist referral in children with autism," said Dr. Christopher McDougle, director of the Lurie Center for Autism at Massachusetts General Hospital, who was not involved with the current study. "Autism is a medically complex condition and we must ensure that people with autism receive the specialist treatment they need, irrespective of racial and ethnic background."

This study adds to the body of research showing race and ethnicity as being important factors in the diagnosis and treatment of autism. Studies conducted during the last decade have consistently noted that children from minority groups face substantial delays in obtaining an autism diagnosis.

African American children in particular are more likely to be initially misdiagnosed, and face an average delay in autism diagnosis of 18 months compared to their white peers. Some have suggested that while white children may be diagnosed with autism when they have mild to moderate symptoms, African-American children tend to be diagnosed when they have severe symptoms, with milder cases going undetected.

Dr. Arshya Vahabzadeh is a resident psychiatrist at Emory University's Department of Psychiatry and Behavioral Health.