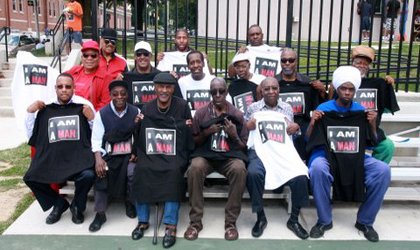 On Saturday, June 15, 2013, former Baltimore City Council President Lawrence Bell held the I AM A MAN Day Showcase and Rally at Cloverdale in Baltimore. Bell says he's tired of seeing African American boys and men walking around with their pants sagging and he's going to do something about it. One of the goals of the No Sagging policy is to get across to young men in the city that they cannot have pride in who they are with their pants hanging off their behinds. James Stowers

BALTIMORE — Former Baltimore City Council President Lawrence A. Bell III says he is tired of seeing African American boys and men walking around with their pants sagging. Bell decided to take action and do something about it. On Saturday, June 15, 2013, Bell held the ‘I AM A MAN Pre-Father’s Day Showcase and Rally’ at Cloverdale Park located at 2500 McCulloh Street in Baltimore.

“We wanted to address the issue of the continuing marginalization of black men,” said Bell. “Generally and specifically the ugly practice of black men sagging their pants. To many of us, this symbolizes the downward trend in the way that black men are viewed.”

The event was the launch of the “Stop Sagging” campaign. Participants signed a pledge that stated: “As a Black Man, I will KEEP MY PANTS UP and carry myself with dignity and self-respect at ALL times, understanding that I am judged by the way I look. As a Black Man, I will HAVE MY BROTHER'S BACK and strive to help and support other Black Men.” 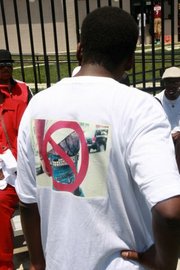 Bell shows the back of his shirt, which urges men to say no to sagging pants

The sagging pants trend is when men and boys wear their pants hanging below their bottom without a belt, often exposing their underwear and sometimes more. Bell noted that many young African American males wear their pants sagging to emulate rappers.

However, Bell pointed out that many of these males do not realize that the origin of sagging pants can be traced to prison inmates who wear loose fitting prison uniforms without a belt. He also said that many young men who practice this trend also don’t realize that in the penal system, if a man’s pants are below his bottom, it is often viewed as an introduction to other men that he is available for sex.

The event drew about 200 males who ranged from ages eight to 80.Attendees included John Edward "Liddy" Jones, who dominated the city's heroin trade in the 1960s and now works tirelessly with other former felons to prevent Baltimore's youth from making the same mistakes that he did.

Attendees also included Clinton "Shorty" Buise, an ex-drug trafficker turned jazz musician who played himself on the HBO show "The Wire," and Melvin "Little Melvin" Williams, a former drug trafficker and Baltimore organized crime figure widely known for his involvement in heroin trafficking in Baltimore in the 1970s and 1980s. Williams also appeared as an actor in the HBO series “The Wire.”

“We received a great response and enthusiasm about the future,” said Bell. “We are implementing a 'No Sagging' policy across this city to let these young men know that you cannot have pride in who you are looking like a buffoon with your pants hanging off your butt,” said Bell. “We have to and can do better.”