Indie Soul Review of the Week 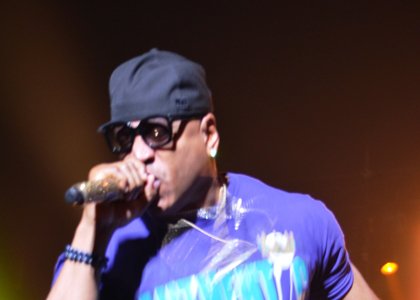 LLCOOL J performed at the Modell Center for the Performing Arts on June 12, 2013.

What an exciting time in entertainment for the Maryland area! On Wednesday June 12, 2013, LLCool J brought his “King of the Mic Tour” to the Lyric Opera House in Baltimore. Guest MC’s included De La Soul, Public Enemy and Ice Cube. Guest deejay was the legendary Chuck Chill-Out. Chuck Chill-Out set the tone for the night with some hot old school joints that got everyone dancing. You follow that up with De La Soul, demanding that if you are a TRUE hip-hop head, you have to get up out of your seats! The nearly sold-out event had everyone dancing as De La Soul ripped through their set of classic joints including “Potholes,” “Me, Myself, and I” and many others. Even the Mayor Stephanie Rawlings Blake was getting down! Who knew!

Following De La Soul, was Public Enemy and they did not disappoint. Chuck D delivered those hard hitting verses from “Shut em Down,” “Don’t Believe The Hype,” and “Can’t Trust It.” When Flavor Flav hit the stage, the crowd went nuts as he performed “911 is a Joke”. DJ Lord showed why he is STILL one of the best deejays in the business as he displayed his skills in five minute solo before Public Enemy had the entire venue shouting “Fight the Power!”

Next up from Cali, Ice Cube.

Ice Cube is part of LLCOOL J's "King of the Mic" tour.

Cube was incredible and proved to critics why he deserved to be on this tour. With his partner in crime WC, they served notice that they could stand with the rest. “We Be Clubbin,” “Why We Thugs,” and “Natural Born” were favorites among the crowd, but when he took it back to the NWA days it was over. Even Ice Cube had to smile seeing the crowd recite his lines word for word. Ice Cube killed his set!

Last but not least, Mr. Todd Smith, aka The Ladies Love Cool J, aka LLCool J delivered the homerun! For us fellas, we were just glad he did not take off his shirt! From “Flava in ya Ears,” to “Who Shot Ya” to “Doin’ It,” and “Goin’ Back to Cali,” LL Cool J showed why he is the GOAT (Greatest of All Time). His signature sound for the ladies brought the house down as he performed “I Need Love,” and “Luv U Betta.”

To be able to see how Hip-Hop has grown up and crossed multicultural lines was simply amazing. Folks as young as eight and people close to 70 were all there enjoying a truly professional show. This is something these young artists of today need to see and take notes. It’s been twenty-five years plus for these artists with no end in sight.