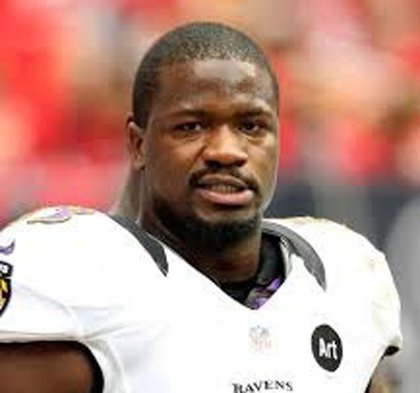 BALTIMORE — It isn’t likely that television cameras and newspaper reporters were around when Jameel McClain was busy feeding 53 families on Thanksgiving Day and providing them with meals to take home for another occasion.

McClain, a linebacker for the Super Bowl Champion Baltimore Ravens, also flew under the radar when he hosted an Easter egg hunt for underprivileged children and there hasn’t been much of a spotlight on the football camps he operates in Baltimore and his native Philadelphia for inner city youth.

“That’s completely by design,” McClain said. “I don’t do all of this community service work to get credit or recognition. I do it because it’s in my DNA, my makeup.”

The spotlight, however, promises to shine on McClain when he is honored on Friday, June 28 by the Baltimore City Branch of NAACP for his tireless efforts on behalf of young people and the disadvantaged.

The 7 p.m. event is scheduled to be held at the Baltimore Hotel Monaco at 2 North Charles Street.

“It’s a great honor to be recognized by such a prestigious organization like the NAACP,” McClain said. “I’m just blessed that I have a platform in which I can try and build up others and help people,” he said, just before a team practice this week.

The inside linebacker suffered a spinal cord contusion last December in a game against the Washington Redskins. But, McClain has worked himself back onto the field and Ravens coaches are anticipating a big year out of the 27-year-old, especially with the retirement of legend Ray Lewis and the departure of Dannell Ellerbe to the Miami Dolphins.

Dean Pees, the team’s defensive coordinator, told reporters that the Ravens definitely want McClain on the field and healthy this season.

“It’s very critical from the standpoint of he’s our leadership out there. He’s been in there and run the show when (Lewis) was out,” Pees said.

Meanwhile, NAACP officials said they are thrilled to honor McClain. “Jameel McClain is an excellent role model to young people and to all of us because he strives for excellence in his chosen profession and is dedicated to giving back to the community through his philanthropic work,” said Tessa Hill-Aston, president of Baltimore’s NAACP.

McClain is also known for his work with the Baltimore area Salvation Army and its efforts to fight hunger. The football star also regularly visits local schools and community centers to offer encouragement and support to young people.

“I like teaching other people, young people, how to follow their dreams,” McClain said. “I let them know that everyone goes through some adversity at some point, but it’s important to continue and to achieve your goals.”

McClain said he remembers being on the receiving end of assistance when he was younger. “I know I wasn’t made by myself. Most of the time it doesn’t cost me anything to help people,” he said. “I just have to show up and show who I truly am, and that has the ability to change people. I have the ability to change so much in this world by just giving some good advice whether it be to an adult or child. If you’re blessed with that privilege, I believe it’s my job to share it.”

The NAACP event honoring McClain is open to the public and tickets are $40. To purchase or to reserve tickets, call 410-366-3300 or email, joeaston1@hotmail.com.